Black entrepreneurs are emerging in every corner of the globe, including the United Kingdom. Black businesses have made significant contributions to the growth of the UK economy.

According to one report, businesses run by entrepreneurs from black and minority ethnic (BAME) backgrounds contribute up to £25 billion to the UK economy.

Despite their influence, they continue to face structural and cultural challenges that impede business growth. In this article, we highlight the entrepreneurial journeys of seven Black UK fashion entrepreneurs who started their own clothing brands and require all the help they can get.

During the pandemic in 2020, Krystina Mhlandhla launched her clothing brand, focusing primarily on women. She founded the company because she couldn’t find comfortable clothing that fit well without looking baggy.

If she did, it was pink or cropped, giving the impression that girls are limited to one color.

“So I found a gap in the market and thought to make something for women,” the 23-year-old told Birmingham Mail. “But after the first day I launched, I got a lot of customers that were male and from that day forward I make my brand unisex.”

Didi Akin, a British journalist, founded April & Alex, a womenswear company based in London. The award-winning collection was founded on the concepts of slow fashion and diversity. Kelly Clarkson, Lucy Hale, and Lyric Ross have all been seen wearing the label.

Armani founded Take Risks and Prosper UK in 2016, a streetwear label that produces t-shirts, hats, tracksuits, gloves, and baby coats. He founded the company while pursuing his dream of becoming an entrepreneur.

“We do everything that every other streetwear brand does, but I believe we offer something unique,” he told the Birmingham Mail.

Shanna Bent, a Central Saint Martins alumna, founded Maison Bent. She specializes in high-end womenswear. She describes her work as “combining vintage Caribbean aesthetics with modern glamour,” according to Country and Town House.

Remy moved to the UK from Congo in 2007 and settled in Aston. Remy, now 25, is the founder of Philippé Remy, a luxury modern streetwear brand named after his father and late mother.

Remy began his fashion business in his bedroom with only $400. He was told to close his business and concentrate on his education. He was unfazed by the criticism and now owns a fashion brand.

Remy was inspired to start his fashion brand while watching the BET Awards, according to him. He stated that seeing people who looked like him receive awards for their accomplishments made him realize that he, too, can strive for greatness in any field of endeavor.

Trai Dewar-Jackson, 23, from Smethwick, started Ninth ‘009’ after his aunty died. His aunty, he claims, used to help his mother with the bills. He revealed that his aunty’s death had put his mother in debt.

As a result, he dedicated his brand to his mother in order to help her pay off the debt.

“The pieces of clothing are inspired from real-life experiences and real-life stories, so everything that is designed, cut and worn has come from an experience that myself or someone in the team has experienced,” he said. “As the founder of this brand, everything in my life has been about storytelling and I do that through my clothing.”

Bianca Saunders, an award-winning designer and creative director, founded the brand. “Taking inspiration from her British and Jamaican heritage, the brand approaches design with a multi-disciplinary attitude that incorporates cross-cultural references into a modern and reinvigorated evolution of menswear,” according to the brand’s website.

One year after it was launched, the brand was selected by the British Fashion Council as ‘One To Watch’ in 2018. It later won The 32nd Andam Grand Prix Fashion Award in 2021. 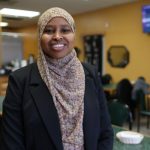