American rapper, Coolio did not have a will in place when he died nearly three months ago, as his adult children will divide the $300,000-plus estate he left in the wake of his passing at 59.

According to a report from The Blast, which reviewed documents in the case, the Gangsta’s Paradise performer died intestate, which indicates he had no will in place.

The outlet reported that the Fantastic Voyage rapper’s seven adult children have been listed as next of kin and probable beneficiaries in a probate filed by his one-time manager.

ALSO READ:  After Spending Christmas Together, Rihanna Mourns Her Cousin's Death And Implies He Was Fatally Shot

It was previously reported in October that Coolio was cremated, and plans were to have his ashes encased in jewelry for his children and other loved ones, his representative told TMZ.

The ashes will be kept in pendants on which each of his children will be able to arrange for customized inscriptions. After the necklaces are sent around to Coolio’s loved ones, the remainder of the ashes are going to be kept in an urn.

Coolio was discovered on a friend’s bathroom floor on September 28 and then pronounced dead of a suspected cardiac arrest.

His longtime girlfriend Mimi Ivey, who had been with him since 2012, exclusively told DailyMail.com how she reacted when she was told the news.

‘I just remember all of the air and life coming out of my body,’ she recalled. ‘I was outside, getting ready to take my son to football practice. All I remember was dropping to my knees. I collapsed.’

She revealed that in accordance with Coolio’s own instructions, he would not be having a full funeral and would be cremated. 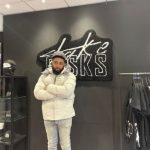