The United States accused Russian military contractors backed by the Kremlin on Tuesday of interfering in the internal affairs of African countries and “increasing the likelihood that violent extremism will grow” in the Sahel region which is facing increasing attacks and deteriorating security — an allegation Russia denied.

U.S. deputy ambassador Richard Mills lashed out at the Wagner Group at a U.N. Security Council meeting on West Africa and the Sahel, accusing its paramilitary forces of failing to address the extremist threat, robbing countries of their resources, committing human rights abuses, and endangering the safety and security of U.N. peacekeepers and staff.

France’s political counsellor Isis Jaraud-Darnault echoed Mills, saying “the model” used by Wagner mercenaries has proven “totally ineffective in combating terrorism.” He cited the “nefarious” and devastating impact of its work and human rights violations, including the alleged killing of over 30 civilians in Mali, and its pillaging of natural resources.

Britain’s deputy U.N. ambassador James Kariuki cited the deterioration of security, especially in Mali, Burkina Faso, Nigeria and the Lake Chad Basin, and the fear of instability spreading to West African coastal countries. “You cannot ignore the destabilizing role the Wagner Group plays in the region. They are part of the problem, not the solution,” he told the council.

Russia’s deputy U.N. ambassador Anna Evstigneeva rejected attempts “to besmirch Russian assistance to Mali,” where Moscow has a bilateral agreement to assist the transitional government, “and in other countries in Africa.”

“Some countries once again today declared that Russia apparently is pillaging and looting the resources of Africa and is facilitating the growth of the terrorist threat,” she said, accusing those unnamed nations of doing the same thing “throughout the world and in Africa”, especially in neighbouring Libya which destabilized the entire area.

“Accusations against Russia are just astonishing, given common sense,” and undermine African leaders trying to resolve their own problems and decide who they want to cooperate with, she said.

Evstigneeva never mentioned the Wagner Group by name. The group is run by a confidant of Russian President Vladimir Putin, Yevgeny Prigozhin, and its mercenaries are accused by Western countries and U.N. experts of numerous human rights cases of abuse throughout Africa, including in the Central African Republic, Libya and Mali.

Giovanie Biha, the deputy head of the U.N. Office for West Africa and the Sahel, told the council that “insecurity has again deteriorated in large parts of the region,” due to activities of armed groups, violent extremists and criminal networks.

As a result, she said, more than 10,000 schools across the Sahel have closed, leaving millions of children without an education, and nearly 7,000 health centres have shut down.

Armed groups are fighting for supremacy and control of resources, she said, and the central Sahel is facing “unprecedented levels of security and humanitarian challenges, socio-political instability, further compounded by the impact of climate change, and food insecurity which was exacerbated by the conflict in Ukraine.”

She added that increasing attacks in countries along the Gulf of Guinea are threatening transport arteries to landlocked countries further north.

According to Secretary-General Antonio Guterres’ latest report issued this week, over 18.6 million people in the region are experiencing “severe food insecurity,” an increase of 5.6 million since the end of June 2022, with Burkina Faso, Niger and Nigeria being the hardest hit. And about 6.3 million people are displaced across the Sahel, an increase of 300,000 since June.

West Africa’s latest wave of coups kicked off in Mali in 2020, followed by another in Guinea in 2021, and then in Burkina Faso in January 2022.

Omar Alieu Touray, president of the West African regional group ECOWAS’ commission, told the council he was pleased to report that transitions to critical elections in the three countries are “on course,” with voting to take place in the next two years. 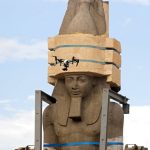