According to the Associated Press, the House unanimously passed a bill on Wednesday to honor Emmett Till and his mother Mamie Till-Mobley with a posthumous Congressional Gold Medal. On August 28, 1955, Till, a Black teen, was lynched by White supremacists in Mississippi after being accused of flirting with a White woman.

Till-Mobley, who died in 2003, insisted on keeping her son’s casket open so that America could see what had been done to him. Jet magazine published photographs of his body. The Congressional Gold Medal is the highest civilian honor bestowed by Congress.

ALSO READ:  Four Nobel Peace Laureates Who Were In Jail When They Won

Carolyn Bryant Donham, a White woman, accused Till of flirting with her at a family store in Money, Mississippi. Till was lynched. His assassination in August 1955 sparked the Civil Rights Movement and became a rallying cry across the country. It was rumored that he had flirted with Bryant four days before his murder. As a result of this speculation, two White men kidnapped Till, beat him, and shot him dead.

Roy Bryant, Bryant’s then-husband, and his half-brother J.W. Milam were charged with Till’s murder but acquitted by an all-white jury. Both men, who have since died, confessed to the murder months later in a paid magazine interview.

“The courage and activism demonstrated by Emmett’s mother, Mamie Till-Mobley, in displaying to the world the brutality endured by her son helped awaken the nation’s conscience,” Booker said in a statement.

The National Museum of African American History will receive the medal. It will be displayed near Till’s casket.

The honors for Till and his mother come after President Joe Biden signed the Emmett Till Antilynching Act into law. The Associated Press reported that Congress had previously failed to pass legislation of this nature nearly 200 times. In 1900, former North Carolina Representative George Henry White introduced the first bill. White was the only Black member of Congress at the time. 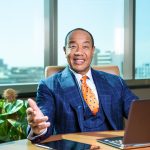