Miriam Nieves, 62, met her donor Brittany Newton’s mother and sisters at Montefiore Medical Center, where the heart transplant was conducted in April of last year. Newton, a 30-year-old certified nursing assistant from Louisiana, died last spring as a result of a brain aneurysm.

ALSO READ:  Outrage As Man Attacked By A Group Of Men In Indiana (video)

“I am extremely thankful and grateful for science, for my family, for my God,” Nieves, a married mother of three and grandmother of six, said after meeting her donor’s family. “But I can’t describe how grateful I am to the donors, who are my angels because they have given me this second chance.”

After conquering a heroin addiction 30 years ago that left her HIV-positive, Nieves’ kidney failed, followed by her heart, according to the Associated Press. Many heart transplant centers in the United States told her they couldn’t help her. Doctors at the hospital decided to include HIV-positive donors in their search for a match for her. They discovered another HIV-positive heart that belonged to Newton, whose family discovered she had HIV after her death.

Newton’s heart and kidney were implanted into Nieves, a former public relations professional. Organs have been transplanted from HIV-positive donors to HIV-positive recipients for many years, but doctors at Montefiore said this was the first heart transplant, according to the Associated Press.

“For the first time ever, we would take a heart from someone that’s HIV-positive to be transplanted into a recipient that’s HIV-positive. Never been done before,” cardiologist Dr. Omar Saeed was quoted by CBS News. “I think it’s going to be done again because we’ve shown that it’s safe,” Saeed said.

On Tuesday, Newton’s sisters, Breanne and Brianca Newton, used a stethoscope to listen to the beating heart. They were glad that their sister had given another woman a second chance at life. Newton’s mother, Bridgette Newton, came along with a photo of her daughter.

“My child is still walking around,” she said. “And for that I will forever be grateful.” 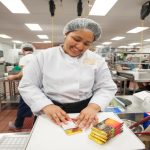