Twenty-five Zimbabwean opposition activists arrived in a truck at the Harare magistrate court on Monday.

Police on Saturday stormed the home of Costa Machingauta, a legislator with the opposition Citizens Coalition for Change (CCC).

The Citizens Coalition for Change party condemned the arrests, insiting its members meeting was a private gathering.

The actvists’ lawyer told the press the state was opposing bail as he detailed the accusations levelled against them.

“The state has preferred charges of contravening of Section 37 of the Criminal Law Codification and Reform Act which has to do with participating in an illegal gathering for the purposes of promoting or inciting public violence,” Wilfred Mandinde revealed. “Of the 25 who were arrested, one is a minor aged 17 and we have managed to secure the release of this minor who has now been placed in the custody of his guardian.”

The CCC said at the weekend that MP Machingauta, his wife and 17-year-old daughter were beaten up before he was carried away.

Police refused to comment. It was unclear whether Machingauta was among those who appeared in court on Monday.

Critics have complained of a tightening clampdown on dissent and the media ahead of general elections due this year.

The Citizens Coalition for Change CCC spokeswoman described the arrests as “calculated to persecute our members.” 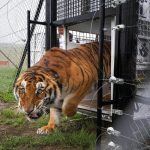