Philip James Bailey was born on May 8, 1951, in Denver, Colorado, to Edward Alverna Bailey and Elizabeth Crossland. He is an eight-time Grammy Award-winning vocalist, composer, lyricist, and drummer. He attended public schools in Denver and graduated from East High School in 1969. He went on to study music at the University of Colorado.

Bailey made his solo debut on Columbia Records in 1983 with the album Continuation. The album peaked at number 19 on the Billboard Top R&B Albums list in the United States and remained there for 30 weeks. It was also a worldwide success, peaking at number 31 on the Swedish Pop Albums chart and number 36 on the Dutch Pop Albums chart. The album’s two singles, “I Know” and “Trapped,” charted at no. 10 and 43 on the Billboard R&B chart, respectively.

ALSO READ:  How Steve Harvey Raked In $42 Million A Year

Bailey’s subsequent albums were gospel. He published The Wonders of His Love in 1985, which peaked at number 13 on the Billboard Gospel list and stayed there for 45 weeks. Inside Out, his 1986 gospel album, debuted at number 30 on the Billboard R&B Albums chart and remained there for 15 weeks. It was also his second international hit, charting at no. 29 in Switzerland and no. 30 in Sweden. Bailey won a Grammy in 1987 for “Best Gospel Performance, Male” for his album Triumph, which peaked at number 18 on the Gospel chart and stayed there for 29 weeks.

His most recent gospel album, Family Affair, was published on Myrrh Records in 1989 and peaked at number 37 on the Billboard Top Gospel Albums chart.

Throughout this time, Bailey remained involved with Earth, Wind & Fire, and after Maurice White’s retirement in 1994, he took over as the group’s on-stage leader. In addition to his self-titled studio album Philip Bailey on Zoo Entertainment in 1994, he also released the jazz albums Dreams in 1999 and Soul on Jazz in 2002. The albums peaked at 43 and 45 on the Billboard Jazz Albums chart, respectively.

Bailey, an influential pop culture artist for over 50 years, received an honorary doctor of music degree from Berklee College of Music in 2008. He was inducted into the Songwriters Hall of Fame in 2010. 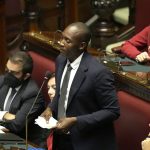