Preparations for the funeral ceremony of football legend Pele are underway in Brazil.

Dignitaries and fans will gather at the Vila Belmiro Stadium in Santos, to pay last respects to the king of football.

ALSO READ:  LeBron James Honours Nipsey Hussle with Custom Crenshaw Jersey, Fans ask if They Can Get One

A tent where Pele’s remains will be placed has been erected in the centre of the pitch at the Villa Belmiro stadium.

ALSO READ:  Lionel Messi's Wedding: Here Is What Samuel Eto'o And Wife Give The Argentine Sensation As Gift!! - (Photo)

Big crowds are expected to converge in the city and surrounding area that is home to almost 2 million people for what is expected to be a deeply emotional ceremony.

The Brazilian Football Federation (CBF) has erected a huge poster of Pele outside its headquarters with the message ‘Eterno’, Portuguese for ‘Eternal’ written above it.

Pele, the Brazilian king of soccer who won a record three World Cups and became one of the most commanding sports figures of the last century, died in a Sao Paulo hospital last Thursday (29th December) after battling colon cancer. He was 82. 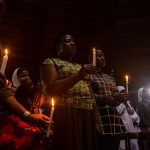