“Today, football continues to tell its story, as always, in an enthralling way. Messi winning his first World Cup, as his trajectory deserved,” Pele, a three-time World Cup champion, wrote on Instagram.

Pele also hailed French striker Kylian Mbappe who scored a hat-trick in the final which had ended 3-3 after extra-time before coolly slotting in a penalty in the shootout.

“My dear friend, Mbappe, scoring four goals in a final. What a gift it was to watch this spectacle to the future of our sport.” 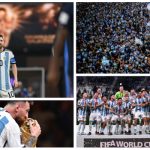