Argentina defeated France 4-2 in a penalty shoot-out to win the World Cup for the third time on Sunday.

France had fought back from 2-0 down and 3-2 down in extra-time to make it 3-3 and take the game to penalties.

Messi had given Argentina the lead from the penalty spot in the first half before Angel Di Maria made it 2-0.

The Argentinians looked to be cruising to victory until Mbappe scored twice in the 80th and 81st minutes to level it at 2-2.

France looked the likelier team to go on and win it, but Messi put Argentina 3-2 ahead in extra-time after poking home from close range after Lautaro Martinez’s shot was parried by France goalkeeper Hugo Lloris.

But there was more drama two minutes from the end of extra-time when Montiel conceded a penalty for handball.

Messi’s Paris Saint-Germain team-mate Mbappe stepped up to score from the spot for the second time to take the game to penalties. 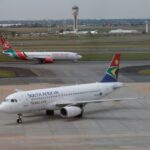