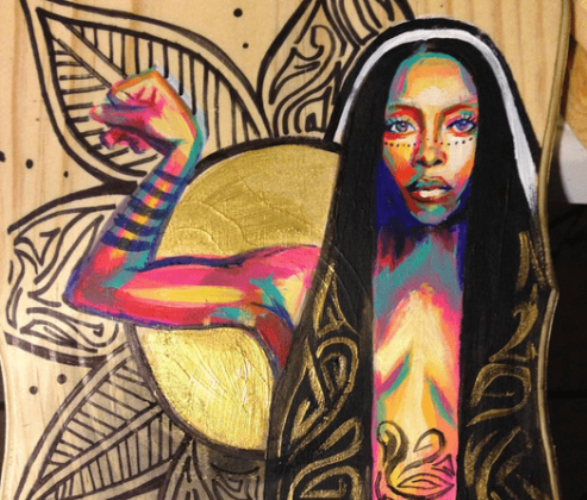 Since kindergarten, the painter has been drawing and creating masterpieces in various mediums.

Now, the artist, tattooist, singer, beautician and model has turned her online success into a thriving business.

While many strive to turn their passion for art into a money-making venture, Robinson has done so in spite of detractors.

The artist extraordinaire spoke to Atlanta Black Star about her consciousness, emerging business and her life.

Robinson gained immediate success after her series of paintings, “Favorites Series Volume 1,” went viral on Tumblr.  This collection is an assortment of 1980s and 90s musical icons including Shakur, Badu and others.

For nearly six years, the young woman has been online producing artistic works — at times for free — for people, building an audience and future clients.

“As an artist in the digital world, I grew my audience by drawing other people online, and they would share with their following,” Robinson said. “I mainly work in acrylic paint, so I can’t really pinpoint which piece aided to my viral success. [However], my popularity stemmed from giveaways and drawing others out of the kindness of my heart. But a drawing I did of [actress] Amiyah Scott via Instagram catapulted me.”

Over the past few years, artists online have benefited from the wave of Black consciousness stemming from the Black Lives Matter movement.

For instance, Atlanta Black Star reported that“The Hate U Give” will be the first novel focusing on the movement to hit store shelves.

The increased love for natural hair, Black history and the desire to buy Black has also coincided with the growing popularity of the movement.

And Tumblr, Twitter and Instagram have become the epicenter of these pro-Black sentiments. Many rising artists have gained popularity as a result.

However, Robinson does not see it that way.

“Inspired? … not necessarily. I’ve become uninspired [at times], ” she pondered. “Just the thought of it and the things attached to it triggers too much negativity. Don’t get me wrong. There are very inspiring stories [from the movement and] I love my people, but everything that’s happening is too repetitive.”

The artist aspires for a more unified nation that celebrates open-mindedness.

“Until we as a nation come together, [racial division] will persist,” the artist added. “Some [people] really care and others want to but are distracted by any and everything the government will throw at us.”

Robinson has created magnificent pieces that capture her subjects in a photo-realistic style. She blends psychedelic metallic colors with abstract designs into some of her most famous paintings.

There is a constant color-scheme running throughout her work that makes every piece uniform but fascinatingly unique.

Her work has been shared thousands of times over her short span online. Many of her fans flock to her because of the unapologetic Blackness and positive vibes reverberating from her work.

“My goal is to create, inspire and uplift, not to trigger negative emotions within another being,” she explained. “… I feel like every piece created out of negativity should be stored out of sight. This is how harmonious environments are created,” she added. “I’m more conscious of the balance between my mind, body and soul. I’m constantly doing what I can to rise past what I think I can achieve. ”

Many of her pieces are under $350. While that may seem pricey, pieces of high art could run you an average of $1000 or more.

She also has customized portraits, phone cases and accessories for affordable prices.

Robinson’s art has been featured in art shows at Art Central Miami and murals around the city.

Besides having incredible talent with a paintbrush, the young artist has become a muse to photographers.

Robinson started modeling in her cousin’s hair salon and at hair shows in the early 2000s in her preteens.

“Growing up under my cousin in a hair salon, I was introduced to a different form of modeling within hair shows,” she reminisced. “It’s a more vivacious approach to walking down a catwalk, with creative hair styling — this had to be around 2004.”

By 2006, she started walking on the runway and accumulated seven fashion shows under her belt. (Some of those shows include the 2007 Miami Beach Funkshion Fashion show and the 2010 SoBe Hair Expo.)

At 5’9, the statuesque beauty began trying to break into magazines last year, while going full-time as an artist.

The Future is Full of Vibes

In Robinson’s sit-down with ABS, she revealed that she keeps a tight schedule with an abundance of multi-tasking.

“That’s what I actually do accumulated: event coordinating, hair styling, tattooing, designing, sculpting, etc. … I find myself implementing more and more into my schedule, but the easiest way [to juggle it] is to organize and [prioritize]. From hair clients to murals, if I’m not busy doing one thing, it is the next. I’ll say that [business is] picking up. It’s definitely not slow. I’ve had to not do commissions for a while to work on personal projects and keep up with the events I coordinate.”

She has become an emerging talent on Miami’s tattoo scene — charging reasonable prices for cool and intricate designs.

In the upcoming months, Robinson will travel to Chicago, Atlanta and New York for business. 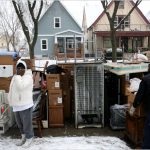 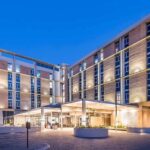