Lebombo Bone:
The Lebombo Bone is an ancient mathematical artifact. It was used as a Tally stick.

Description
The Lebombo Bone is essentially a Baboon fibula that has tally marks on it. It is 35,000 years old. It is conjectured to have been used for tracking menstrual cycles, because it has 29 marks on it. It is older than the Ishango bone.

History
In the 1970’s during the excavations of Border Cave, a small piece of the fibula of a baboon, the Lebombo bone, was found marked with 29 clearly defined notches, and, at 37,000 years old, it ranks with the oldest mathematical objects known. The bone is dated approximately 35,000 BC and resembles the calendar sticks still in use by Bushmen clans in Namibia.

CNN report on Ishango Bone below:

The closest town to the Lebombo Mountains is Siteki, renowned for its Inyanga and Sangoma School, a government school to train healers and diviners. It’s a fascinating mix of botany, spiritualism and natural science, and you can visit the school if you arrange it in advance through Swazi Tourism in Mbabane.

ALSO READ:  PHOTOS: See Various Snapshots Of Indigenous Tribes, You Won't Believe Their Traditions And Where They Live

Ishango Bone:
The Ishango bone is a bone tool, dated to the Upper Paleolithic era. It is a dark brown length of bone, the fibula of a baboon, with a sharp piece of quartz affixed to one end, perhaps for engraving. It was first thought to be a tally stick, as it has a series of what has been interpreted as tally marks carved in three columns running the length of the tool, but some scientists have suggested that the groupings of notches indicate a mathematical understanding that goes beyond counting. It has also been suggested that the scratches might have been to create a better grip on the handle or for some other non-mathematical reason. The Ishango bone was found in 1960 by Belgian Jean de Heinzelin de Braucourt while exploring what was then the Belgian Congo. It was discovered in the African area of Ishango, which was centered near the headwaters of the Nile River at Lake Edward (now on the border between modern-day Uganda and Congo). The bone was found among the remains of a small community that fished and gathered in this area of Africa. The small settlement had been buried in a volcanic eruption.

Ishango bone on exhibition at the Royal Belgian Institute of Natural Sciences, Brussels

The artifact was first estimated to have originated between 9,000 BC and 6,500 BC. However, the dating of the site where it was discovered was re-evaluated, and it is now believed to be more than 20,000 years old. The Ishango bone is on permanent exhibition at the Royal Belgian Institute of Natural Sciences, Brussels, Belgium. 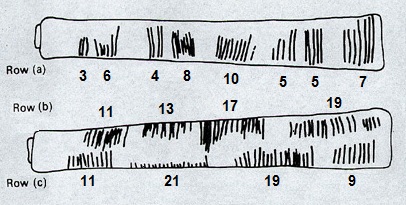 Some believe the three columns of asymmetrically grouped notches imply that the implement was used to construct a numeral system. The central column begins with three notches, and then doubles to 6 notches. The process is repeated for the number 4, which doubles to 8 notches, and then reversed for the number 10, which is halved to 5 notches. These numbers may not be purely random and instead suggest some understanding of the principle of multiplication anddivision by two. The bone may therefore have been used as a counting tool for simple mathematical procedures. Furthermore, the numbers on both the left and right column are all odd numbers (9, 11, 13, 17, 19 and 21). The numbers in the left column are all of the prime numbers between 10 and 20 (which form a prime quadruplet), while those in the right column consist of 10 + 1, 10 − 1, 20 + 1 and 20 − 1. The numbers on each side column add up to 60, with the numbers in the central column adding up to 48. In the book How Mathematics Happened: The First 50,000 Years, Peter Rudman argues that the development of the concept of prime numbers could only have come about after the concept of division, which he dates to after 10,000 BC, with prime numbers probably not being understood until about 500 BC. He also writes that “no attempt has been made to explain why a tally of something should exhibit multiples of two, prime numbers between 10 and 20, and some numbers that are almost multiples of 10.” 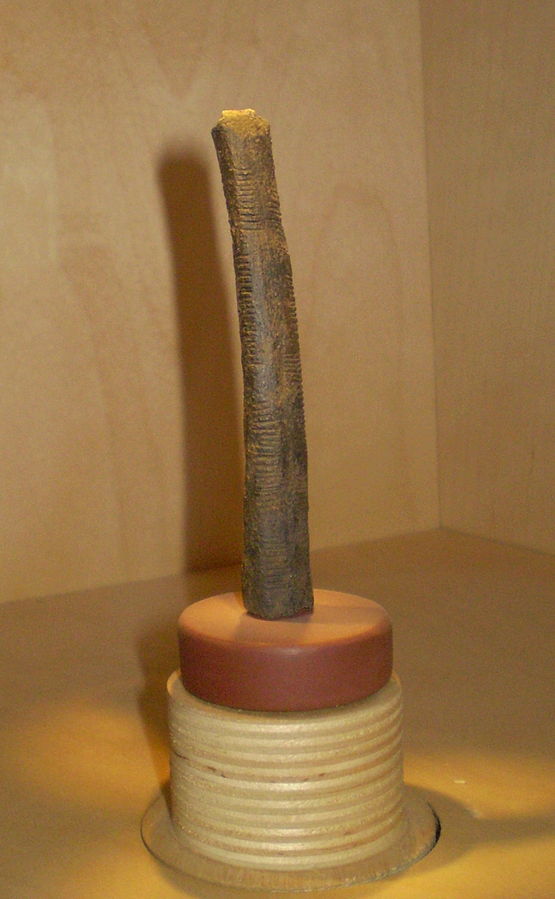 Lunar calendar
Alexander Marshack examined the Ishango bone microscopically, and concluded that it may represent a six-month lunar calendar; but see Judy Robinson who argues that Marshack overinterprets the data and that the evidence does not support lunar calendars.] Claudia Zaslavsky has suggested that this may indicate that the creator of the tool was a woman, tracking the lunar phase in relation to the menstrual cycle. 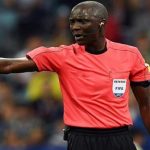 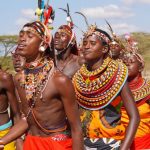