Amina Mohammed, the deputy secretary-general of the United Nations (UN), has said that when she was appointed minister of environment in Nigeria, she was seen as the dustbin lady.

According to her, people did not see the real value of her office.

She said this on Wednesday while speaking at the International Monetary (IMF) and the UN working together conversation with Christine Lagarde, the managing director of the Internatoonal Monetary Fund, IMF.

ALSO READ:  Why Maradona Called Ronaldo A ‘Sorcerer and Animal’ While Comparing Him to Messi

“I have to tell you, when I went back to Nigeria as minister of environment, my state was saying, it was environment they gave you? that is the dustbin lady. They did not even get that environment was broader than just waste disposal,” she told Lagarde and a room full of development experts.

She said climate change is important, so is gender parity and inclusion for youths.

Mohammed also stated that “the average age of entry into the United Nations is 45”, adding that the UN is working hard to change this, and include young people in its working process.

The mother of six further spoke about every of the 17 goals that make up the Sustainable Development Goals, SDGs, as her children, saying all were equally important for the future of the world. 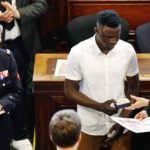