There has been chaos at Kabul airport today, August 18, as people try to flee from the capital that has fallen to the Taliban.

Women were filmed crying and begging US troops to let them flee on evacuation flight, saying: “Help! Taliban are coming.”

Meanwhile, the Talibans have been filmed firing gunshots into the air at the crowded airport and are whipping people to control the crowds.

The Taliban gunmen have reportedly now surrounded the airport, with those on ground saying they are deciding who can leave and who stays. 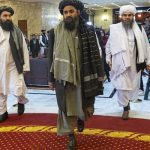 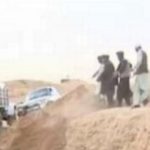