Previous Next
No matter who you are and what rank you hold, as long as you are a woman, then its imperative for you to stand up against violence on women. These were the bottom line of the statement made by  The African Union Commission’s former chairperson, Nkosazana Dlamini-Zuma

According to a report published on SABC, Dlamini-Zuma said this while dismissing suggestions that Zimbabwean First Lady Grace Mugabe’s alleged assault was a blight on women aspiring to lead.

She said that women were human beings and like anybody else, some were bound to make mistakes “just like man do”.

She said: “Whether one beats another … it is wrong and the law must take its course … but women are capable … they cannot be judged on that.”

Grace was accused of assaulting a South African model Gabriella Engels on Sunday and was pleading for diplomatic immunity.

The police ministry confirmed on Wednesday that the Zimbabwean first lady had not left the country after she did not turn up at the Randburg Magistrates Court to answer to assault charges.

“The suspect’s lawyers and her government representatives made verbal representations to SAPS investigators that the suspect wished to invoke diplomatic immunity cover and thus she elected to change her mind about the warning statement,” the ministry said in a statement.

Grace was visiting her sons on Sunday when she apparently stormed into their room and assaulted Engels while her bodyguards watched.

She allegedly bashed Engels at a hotel in Sandton, accusing her of living with her sons, who were both in their 20s and lived in Johannesburg.

Grace allegedly assaulted Engels with an electric cord in the face and head. The model sustained serious injuries and filed a police report.

The two sons were known for lavish lifestyles and notoriety. The duo was in July kicked out of their rented apartment block in Johannesburg’s leafy suburb of Sandton after they reportedly engaged in “unacceptable behaviour” that left a security officer at the complex with a broken leg and arm.

Reports indicated that Mugabe could use the trip to try and help the situation surrounding his controversial wife and kids. 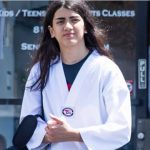 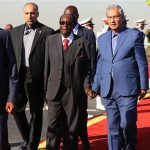