Uganda’s long serving President ,Yoweri Museveni seem to be testing waters as his counterpart,93 year old Robert Mugabe has been shown the way out after mounting pressure to resign as President.

On Wednesday just few hours after Robert Mugabe tendered in his resignation letter and read out by the country’s Speaker of Parliament, Museveni, 73 took to twitter and announced that his ‘’government will be able to look into raising salaries of soldiers, public servants, health works and teachers’’. 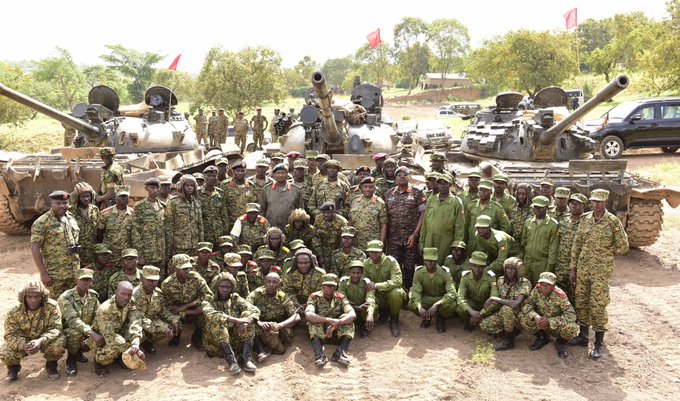 ‘’Now that the economic situation in Uganda is improving, the government will be able to look into raising salaries of soldiers, public servants, health works and teachers also deal with institutional housing’’, he said.

His tweet raised eyebrows as some questioned whether he was trying to disrupt a revolution coming his way.

Now that the economic situation in Uganda is improving,  the government will be able to look into raising of salaries of soldiers, public servants, health workers and teachers and also deal with institutional housing. pic.twitter.com/hvFlDiJ35I

Banange, that is bribery Ssssebo! Are you trying to disrupt the coming revolution and your ouster? Because you deleted all your Bush comrades, not sure the young blood in UDF will give you a #Mugabe treatment. Good luck though #Resist

The veteran Ugandan politician came to power on the back of a guerrilla struggle. Since then, he has refused to leave power and most recently eliminated presidential term limits.

Attempts to open conversations around the subject was halted in the media in the East African nation and Members of Parliament even scuffled on the floor of parliament as the issue was raised.