The President of Uganda, President Yoweri Musuveni has concluded plan to meet Samuel Mugarura, a student at Makerere University who invented a teargas canister made from common household kitchen ingredients like sugar, salt, and food coloring. According to the Daily Monitor, the third year chemistry and botany student made headlines last month after he blasted what he called a homemade teargas canister. He was later disowned by his lecturers after police said they would arrest him over the gadget.

In a telephone interview with the Daily Monitor, Mugarura said he had received a call from Ugandan State House officials who informed him that the President wanted to meet him in regards to his invention.

“They said the President would like to meet me to offer me support for my project. They promised to take me to State House to meet him individually,” Mugarura revealed.

Uganda’s Internal Affairs Minister, Gen Jeje Odong, heaped praise on Mugarura’s work, saying that the government must seek ways to promote and encourage local innovators, as the country pushes towards self-reliance in science and technology.

“Science and innovation are very welcome, especially if they are done by Ugandans. I welcome those innovations. What is important is for us to harness them,” he explained.

Mugarura has become somewhat of a controversial figure in Uganda, with opinions divided on whether to consider him a maverick inventor or a social delinquent. The Daily Monitor reports that Mugarura first demonstrated the use of his contraption last month in an open field inKajjansi, outside Kampala. His demonstration quickly earned him the scrutiny of Ugandan law enforcement authorities, and he was consequently declared wanted by the police.

Ugandan Police Spokesman Andrew Kaweesi told the press in September that Mugarura was “a wanted criminal” for alleged drug abuse and criminal assault.

“A lot has been said that the police are witch-hunting Samuel Mugarura and his teargas innovations. That is not true. He is a wanted criminal with two cases at Wandegeya Police Station. He is using this innovation [as a ] cover up,” Kaweesi said.

However, in a statement responding to the police spokesman, the president of Makerere University’s student body, Roy Ssemboga,  expressed support for Mugarura, declaring that the student body was ready to stand by him.

“Police must be exemplary. Our colleague invented teargas from sugarcane sucrose and is now being hunted. You arrest him, you will arrest the whole Makerere,” he promised. 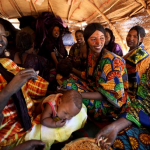 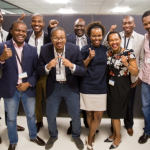