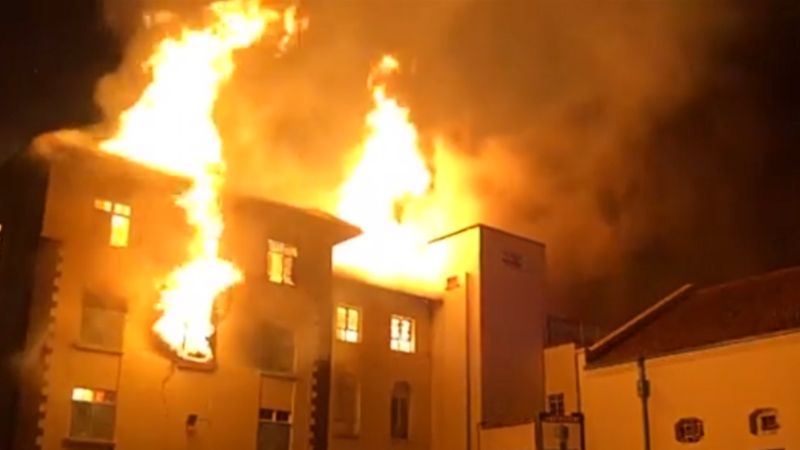 A policeman and a private security guard have been arrested in Uganda, as police investigate the cause of the fire which gutted an iconic building at Makerere University in the capital, Kampala.

Investigators are looking into whether there was a lapse in security at the building or if officers absconded from duty, said police spokesman Fred Enanga.

Known as the “Ivory Tower”, a blaze in the early hours of Sunday left the building’s distinctive white walls with blue-shuttered windows blackened.

Makerere is East Africa’s oldest university, with students from across the region studying there. Its alumni include Tanzania’s first post-independence leader Julius Nyerere, Kenyan author Ngugi wa Thiong’o, academics and John Sentamu, the retired Anglican Archbishop of York in England.

Investigators have so far been unable to access the entire interior of the building. It is considered risky because several of the walls have developed cracks, and whole floors were burnt out.

Firefighters remain on standby at the campus, following a second blaze on Sunday night, which officials have said was due to re-ignition, as heat built up in the debris.

The initial fire is said to have started from one of the offices on the third floor, burning through wooden partitions and most of the roof.

It then spread through the building’s three stories, barely sparing anything but the basement.

Financial records and numerous valuable documents are believed to have been burnt to ashes.

The university is just a month away from re-opening for final year students, following the easing of coronavirus restrictions on Sunday.

Authorities say that the destruction caused by the fire will not affect measures being put in place for the re-opening.