President of the United States, Donald Trump, says he is on a mission to achieve global peace especially peace on the African continent.

In comments made to journalists on the sidelines of a North America Treaty Organization (Nato) summit in Brussels, Trump stressed that Africa’s problems were so complicated that only few people could understand it.

Trump said in part: “Africa right now has got problems like few people would understand. They have got things going on there that nobody could believe in this room.

“If you saw some of the things that I see through intelligence – what’s going on in Africa – it is so sad, it is so vicious and violent – and we want peace. We want peace for Africa. We want peace all over the world.

The U.S. is a strong partner to governments across Africa in several areas of cooperation. Washington’s diplomacy is by far the strongest on the continent. It also has strong ties in the area of economic, anti-terrorism and humanitarian endeavours.

“That’s my number one goal – peace all over the world and we are building up a tremendous military because I really believe through strength you get peace. We are going to have a military like we never had before,” he added.

The U.S. is estimated to have thousands of troops and over thirty military bases across Africa. Security watchers have also averred that it has other facilities that remain secret. The most recent loss the army suffered was when four special forces were killed in an ambush in Niger last year. 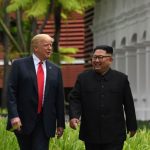 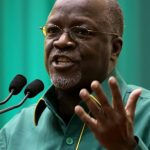