If laughter is the very best medication, after that Africa is definitely the drug store. Over the last 10 years, African funny has actually revealed great development and also acquired appeal, creating a few of the most effective comics the globe has actually ever before seen. Comics have actually artistically transformed typical on a daily basis happenings right into imaginative expressions, consequently motivating the continent and also the globe at large.

Here’s our take on some of the top African comedians.

BRIGHT OKPOCHA AKA BASKET MOUTH
Born and raised in Abia State, Nigeria, Basket mouth (real name Bright Okpocha) is a comedian whose resume one cannot simply ignore. The first African to ever host a show at the Apollo in London, Basket mouth has continued to set trends performing at events like Lord of the Ribs, Comedy Central Presents and the Basket mouth live at the 02 arena in London.

TREVOR NOAH
Africa’s most famous comedian, Trevor Noah is well known for his unapologetic approach to race, apartheid and politics. Born to a Swiss father and a Xhosa mother, Trevor’s struggle to identify to a one specific stereotype makes him a genius when it comes to comedy as he both relates to his audience at the same time, sharing a unique perspective to everyday issues.Trevor was the first South African comedian to sell out a one-man show and has continued to break records ever since. In 2015, Trevor took over as host of ABC’s “the daily show” from Jon Stewart, becoming Africa’s biggest comedy export of all time.
Loading...

EDDIE KADI
Born in the Democratic Republic of Congo and raised in the UK, Eddie Kadi’s blend of English wit and African humour has made him one of the most successful black comedians in the UK. With milestones like appearances on the BBC’s Comedy Empire, as well as leading roles in movies like Anuvahood, Shank and Gone Too Far, Eddie Kadi’s ability to entertain and be funny across multiple mediums makes him one of the most outstanding comics to ever come out the continent. Apart from comedy acts, Eddie is also a well known radio presenter, MC, and philanthropist.

RONNIE KHALIL
Egyptian-American Shaher Ronnie Khalil is a comedian who has toured the United States, headlined in four continents and whose comedy has been enjoyed by millions around the world. With features on ABC News, CNN, Al Jazeera and the Conan O’Brien show, Khalil’s “Politically incorrect” storytelling skills places have earned him a reputation as one of Africa’s biggest export to the comedy world. Khalil currently lectures around different colleges in the United States on topics such as success and motivation.

HELEN PAUL
Known to many as Tatafo, Helen Paul is a Nigerian stand up comedianne whose Quirkiness, spontaneity and voice manipulation skills compare to no other. Helen, who is a graduate of the University of Lagos, broke into the comedy scene as as a Mischievous comic character on a radio program known as “Wetin Dey” on Lagos’ Radio Continental where she played “Tatafo” – a witty kid who addressed Lagos’ major problems in a childlike and satirical manner. Helen now runs the Helen Paul Academy where she trains student creative art and how it affects people’s daily lives.
Loading...
273
SHARES
ShareTweetGet Stories like this
PinterestGoogle 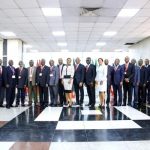