I have been fascinated by how some sections of society have been shocked, if not outraged, by ordinary black South Africans’ response to a fashion advert that ridicules black people.

The advert in question is from the Swedish fashion retailer H&M, and it features a black boy wearing a green hoodie with the words “coolest monkey in the jungle” emblazoned across the front of the garment. 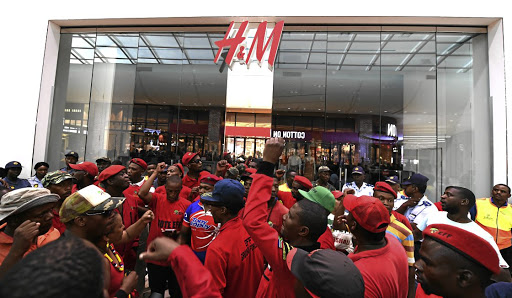 EFF members protest in front of the H&M store at the Mall of Africa in Midrand, Johannesburg. Party members have vandalised H&M stores after an advert with a black boy wearing a hoodie with ‘coolest monkey in the jungle’ written on it sparked an outcry. / Felix Dlangamandla / Gallo Images

All over the world, black people responded with anger at what has been correctly perceived as an attack on the black person, regardless of where they are. Incendiary is the word that comes to mind when one looks at the ad.

I wasn’t at all surprised when black people, led by the EFF, trashed H&M outlets in Johannesburg, Cape Town and Pretoria. It was a long time coming.

You don’t have to possess the memory of an elephant to remember that Dove campaign, which showed a black woman going into the shower and, after using the soap, emerging as a white woman. The insinuation was clear: white is the standard to aspire to because it is better.

To be sure, the Dove advert was a continuation of a long tradition of adverts that denigrated the black person over centuries, especially in the US and South Africa.

The Dove campaign was reminiscent of an advert for Pears soap, which shows two children, one white, one black. The white kid, well-scrubbed and well-dressed, offers a bar of soap to a black kid who is insalubrious. After an encounter with Pears soap, the black kid is transformed into something almost white!

But that ad was made in 1783. The lovely people at Dove simply tweaked it.

Both Dove and H&M products are available all over the world and their adverts were splashed online.

People who have been abused so many times over the years are sensitive, and will not tolerate denigration

The adverts are woefully out of sync with a world that condemned apartheid as a crime against humanity. Racism was the cornerstone of apartheid.

For those who are shocked by the physical attacks on H&M stores, a short walk down memory lane is in order. Come, walk with me.

The liberation movement in this country, personified by the ANC that was born in 1912, started out as a peaceful forum whose primary goal was to reach out to the other side so that the country’s problems – which came into being as a result of racial oppression – could be sorted out amicably.

As the liberation movement evolved, giving birth to other organisations that differed strategically from the ANC, the emphasis was still on negotiation rather than confrontation.

When it became clear that the “other side” was sneeringly unwilling to concede anything, armed confrontation was launched.

Armed confrontation created a climate conducive to popular uprisings that became the touchstone of South African politics from 1976, through the mid-1980s right up until 1990.

It was not because of FW de Klerk’s benevolence that we achieved the negotiated settlement that saw Nelson Mandela become the first president of a unified country that hoped to be nonracial one day.

With all its imperfections, this settlement was fought for by ordinary black people who’d taken to the streets to say: enough is enough.

Any right-thinking person would therefore find the Dove and H&M adverts galling because they are taking us back, opening up the wounds, as it were.

Given our history, it is logical that South Africa is leading the charge against these racist campaigns.

The next time an advertiser embarks on a campaign, they have to remember that adverts do not happen in a vacuum. They flow in the bloodstream of society. Like the society in which they are made, they carry the baggage of history.

People who have been abused so many times over the years are sensitive. They are not going to tolerate denigration. Not again!