Theresa May arrives with her husband Philip May, 2nd left, at Buckingham Palace, London, Wednesday, July 13, 2016, where she will have an audience with Queen Elizabeth II to formally accept the position of Britain’s Prime Minister. Earlier David Cameron resigned from the post during his meeting with the queen. (Steve Parsons/Pool Photo via AP)

Theresa May has officially been appointed as the Prime Minister of the United Kingdom, becoming the second woman prime minister of Britain, after ‘Iron Lady’ Margaret Thatcher. David Cameron formally stepped down from office today.

The changeover took place at the Buckingham Palace after individual meetings with the Queen. May is scheduled to proceed to 10 Downing Street, where she will deliver her first speech as prime minister.

The 59-year-old Tory MP became the Leader of the Conservative Party after being elected unopposed. Once assuming power, May, who represents Maidenhead, will set the ball rolling for Britain’s imminent exit from the European Union.

# “We will make Britain a country that works not for the privileged few, but for everyone of us, that will be the government I lead,” says Theresa May

# We are living through an important moment in our country’s history, will rise to the monent, Theresa May on UK leaving Europen Union

New British Prime Minister Theresa May speaks to the media as she arrives at her official residence,10 Downing Street in London. (AP Photo/Frank Augstein)

# Will strengthen the United Kingdom and the bond that unites the nations of the UK, says May

# David Cameron a great ‘modern prime minister’, “I plan to lead in the spirit of ‘one nation’,” says May

# May arrives at 10 Downing Street

# Theresa May appointed as the Prime Minister of the United Kingdom

Queen Elizabeth II welcomes Theresa May, left, at the start of an audience in Buckingham Palace, London, where she invited the former Home Secretary to become Prime Minister and form a new government, Wednesday July 13, 2016. (Source: AP)

# Theresa May arrives at Buckingham Palace to meet the Queen

# Buckingham Palace issued a statement saying that the Queen has “graciously accepted” David Cameron’s resignation as prime minister and first Lord of the Treasury: BBC

# Arnold tweeted, “Best wishes to my friend David Cameron. You are the definition of a great public servant.” 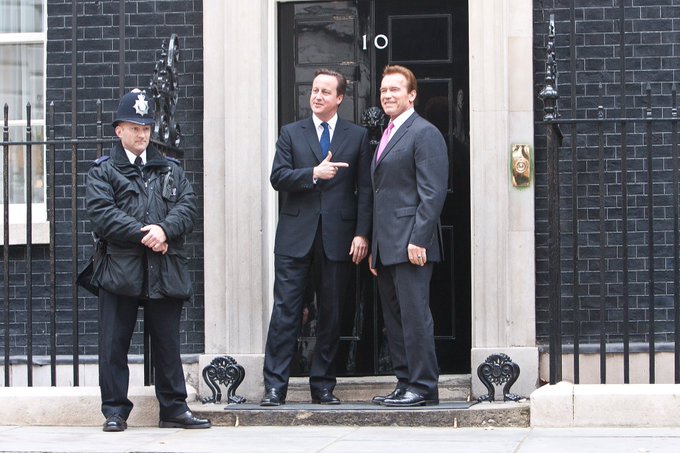 Best wishes to my friend @David_Cameron. You are the definition of a great public servant.

# “I want to thank everyone who has given so much support to me personally over these years,” said Cameron, including his team at Number 10 and his political advisers.

# David Cameron tweeted, “It’s been a privilege to serve the country that I love.”

It's been a privilege to serve the country that I love.

# “It’s not been an easy journey and of course we’ve not got every decision right,” said David Cameron

#David Cameron is preparing to resign as the Prime Minister

# At 17:00 BST, David Cameron will arrive to formally tender his resignation to the Queen at Buckingham Palace, London

# Cameron told MPs he would “miss the roar of the crowd” and said there had been many “amazing moments” during his six years in power.

# David Cameron receives standing ovation at his final speech which he ends with, “I was the future once.”

# Incoming prime minister Theresa May greeted with huge cheer as she enters the House of Commons.