Her voodoo practice dates back 200 years. Unlike the thematic portrayal of voodoo culture in mud thatch buildings with wooden objects sprinkled with blood and feathers with bottles loosely spread on the floor, the Voodoo Spiritual Temple in New Orleans depicts a flair of modernity in its outlook.

A bible tucked in a closet, beautiful carvings, traditional beads, dollar bills rolled nicely and the alluring scent of the incense are what greet congregants and visitors of the Voodoo Spiritual Temple.

ALSO READ:  New App to Help Save Pregnant Women and Their Babies Gets $200K in Funding

Every relic in her temple has a story to share. Priestess Miriam Chamani is considered a queen of voodoo practice based on her dexterity in using native African traditions and Christian themes to bring healing to her congregants.

Born Mary Robin Adams, the priestess said her first spiritual encounter was at age 15 which resulted in a fierce rainstorm that swept across her home while her mum was at church.

Stephanie Bilinsky who did her doctoral dissertation on the Voodoo Temple recounted she was awed by her engagement with the Voodoo priestess and her early beginnings.

Priestess Miriam was born in Pocahontas, Mississippi, in 1943 to a Baptist family. The expectation was she would assist on the cotton plantation, but, the cruel conditions of Blacks in the segregated South strengthened her resolve to move out of Mississippi.

She had her professional training in nursing, which Bilinsky in her work attributed to her insights on healing and early grooming to become a servant of the Voodoo Temple. The Priestess said at an early age, she had dreams and premonitions from spirits she considered ancestors.

She said she had the calling to be a minister and spiritual counselor through those dreams and signs she received from the Holy Spirit as well as her ancestors. She was eventually ordained as a bishop in Chicago when she was fully convinced her career path lies in spirituality.

Priestess Miriam established the Voodoo Temple in 1990 from a position where she wanted to rely on traditional West African spiritual and herbal healing practices. An interesting twist in her journey to Voodoo practice was the priestess’ encounter with a fortune teller. She recounted that one of her acquaintances, Sister Colette, told her her success in life was linked to marrying a Black man.

She fondly recalled that when she met Belizean immigrant Oswan Chamani, she knew he would be her husband. The Voodoo Priestess said she founded the temple with her husband when they moved to Louisiana in 1990. She said they came to New Orleans with only six dollars on them.

She said economic conditions compelled her to bury her husband in the temple, adding that, news of death uplifts her spirits rather than overwhelming her. She said the temple is not only a spiritual ground for praying but serves as a center for remembrance and celebration.

For Miriam, the temple is meant for healing alone. She indicated that she officiates weddings as well as funerals at the Voodoo Spiritual Temple. 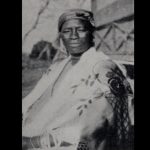 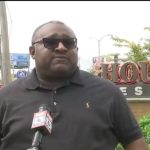