On December 26, 2018, the UK Foreign Secretary, Jeremy Hunt, announced that the Foreign and Commonwealth Office has authorized an autonomous survey into the oppression of Christians around the globe.

In his declaration, Jeremy Hunt noticed that over a century back, Christians comprised 20% of the Middle East’s socioeconomics, yet that figure has dropped essentially, to beneath 5%.  Such a sharp decline requires examination. The Middle East is regularly alluded to as the “Support of Christianity”, it is of principal that we secure this religious network and its training in the locale. There is a genuine hazard that if unaddressed, the circumstance will just fall apart prompting the aggregate demolition of whole Christian people group in the Middle East. 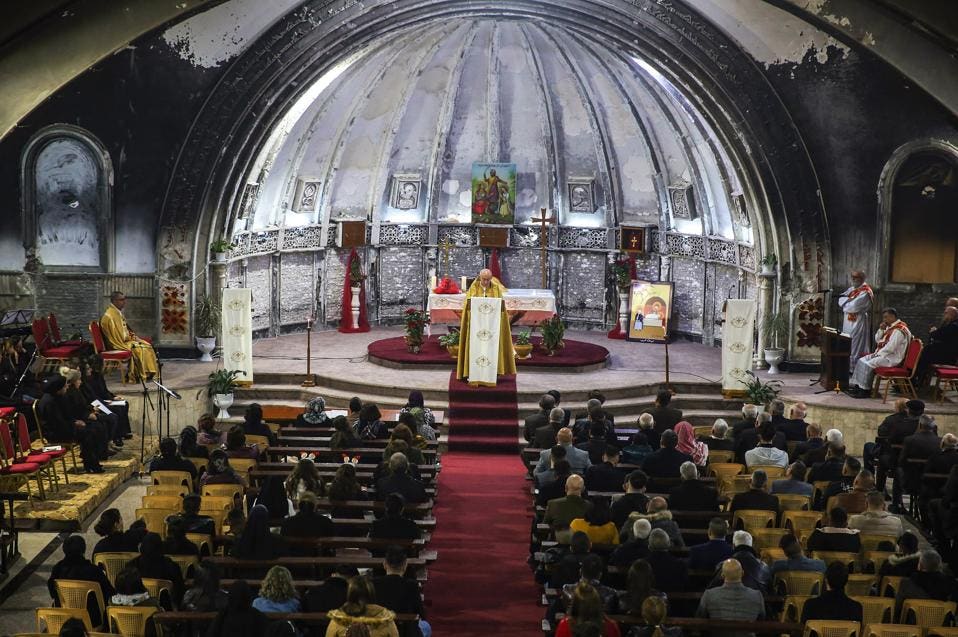 An Iraqi Syriac Catholic priest leads Christmas morning mass at the Mar Behnam and Mart Sarah Syriac Catholic Church, which was damaged and defaced during its occupation by Daesh, in the predominantly Iraqi Christian town of Qaraqosh, in Nineveh province some 30 kilometres from Mosul, on December 25, 2018. (Photo credit: AHMAD AL-RUBAYE/AFP/Getty Images)GETTY

As part of his announcement, Jeremy Hunt referred to recent high-profile reports of mass atrocities committed against Christians in parts of the Middle East and elsewhere. These included the 2017 Palm Sunday attack at a Christian Cathedral in Egypt; the case of Asia Bibi, a Pakistani Christian accused of blasphemy, and other similar targeted persecution of Christian minorities.

The fears expressed by Jeremy Hunt are serious and fully justified. In recent years, several parties have reported that Christians are the most persecuted religious group in the world. According to a studycarried out by the University of Notre Dame’s Center for Ethics and Culture, the Religious Freedom Institute and Georgetown University’s Religious Freedom Research Project, Christianity is “the most widely targeted religious community, suffering terrible persecution globally.” Earlier this year, Open Doors released its World Watch List 2018, the list is released annually and exposes 50 countries where it is most difficult (if not impossible) to live as a Christian. Open Doors assessed that in 11 countries the persecution of Christians was extreme and in 24 very high. It is noteworthy that in countries where Christians are persecuted, they normally represent a minority group. It is also noticeable, that in many of these countries, other religious minorities are subject to persecution. Addressing the persecution of Christians will also help to address the persecution of other religious groups.

The newly commissioned independent review will be lead by Reverend Philip Mounstephen, Bishop of Truro. The independent review will consider several difficult questions, including: “how can the [UK] use [its diplomatic network] to encourage countries to provide proper security for minority groups under threat? Has [the UK] been generous enough in offering practical assistance, and does the level of UK support match the scale of the suffering? Has [the UK] always got [its] foreign policy priorities right in terms of advocating for and expressing solidarity with this group?”

Indeed, as Jeremy Hunt stated in his piece published in the Telegraph “I am not convinced that our response to the threats facing this particular group has always matched the scale of the problem, nor taken account of the hard evidence that Christians often endure a disproportionate burden of persecution.”

For the initiative to be comprehensive and accurately portray the situation of the persecuted Christians around the world, it is crucial that the independent review works closely with religious leaders,  local partners (especially organisations providing assistance to the persecuted communities) and survivors of the atrocities. Listening to the victims is paramount, and indeed, the international community has failed to do so on many occasions. For example, it is clear that the persecution of Christians in Iraq began long before 2013, and before the genocidal campaign by Daesh. Although the evidence which confirms this was considered by the European Court of Human Rights, and the dire situation was clear for many years before, it was largely ignored. The UNHRC Eligibility Guidelines for Assessing the International Protection Needs of Asylum-Seekers from Iraq, published in May 2012, states that, “The number of Iraqi Christians has been drastically reduced since 2003, with significant displacement inside and outside the country.” The report identified that since the fall of the regime in 2003, “armed Sunni groups have targeted Christians and their places of worship. Attacks are commonly motivated by religion, (imputed) political opinion and/or (perceived) wealth.” Furthermore, “In 2011 and early 2012, Christians reportedly continued to be subjected to threats, kidnappings, attacks on their homes and assassination.” Another report, the UK Border Agency Iraq Operational Guidance Note, published in December 2011, identified that the authorities in central and southern Iraq were unable to provide effective protection for Christians and other religious minorities. The situation of converts to Christianity was reported to be even more severe.

The signs were there. The evidence was there. Nonetheless, the response failed to address the concerns and, as a result, was inadequate. The challenges faced by Christians around the world, not only those which manifest in mass atrocities, need urgent consideration and action.  This independent review takes place very late but represents an important step taken to address the persecution of Christians worldwide, with potential benefit for other religious minorities as a result. Other states, and also international actors should follow in the footsteps of the UK.