The first branch of a nation’s military force to encounter and engage a foreign hostile threat is usually the country’s naval force. In most African countries, the Navy is not usually given serious attention even though it is the first line of defense against imminent danger. At the first indication of a possible threat to a nation’s territorial security, the naval contingents are usually tasked to investigate and ward off the incoming danger.

According to the Webstar dictionary, the term ‘Navy’ or ‘Naval Force’ is a country’s entire sea force, including ‘ships’ and personnel (sailors). The word ‘ships’ could include surface and sub-surface vessels. It is pertinent to understand the most capable and powerful naval forces in Africa so as to enable our readers decide ‘which country has the most powerful military in Africa’ which has been analyzed by us.

Uniquely amongst other African countries is Tunisia and Nigeria who has left their navy without any significant upgrade for a long time. The Nigerian Navy withdrew the use of defensive anti-ship missiles from service without seemingly replacing it. DefenceNigeria.com reported that China offered Nigeria anti-ship missiles for the new Stealth corvettes (Unity and Centenary) which was turned down by the latter to the dismay of the Chinese.

ROLES OF A WELL BALANCED NAVY

In Africa, the cost of operating a fully functional all aspect navy is challenging due to various reasons like political, economic and lack of technical know-how. Furthermore, there is limited clarity in designating naval vessels in terms of roles and missions. For instance, an Offshore Patrol Vessel (OPV) is usually referred to as a frigate and a frigate could be armed like an OPV. Corvettes which are supposed to be used to screen larger and more powerful navy ships are usually used to chase sea criminals’ etc. 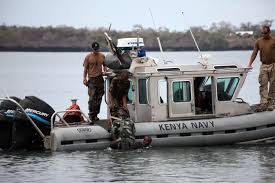 Finally, most conflict are usually internal in nature or at most border dispute related and the Army and Air Force are mostly called upon to restore order thereby putting the importance of a navy in question. In essence, the relevance of the navy is somewhat less of a priority. Such trend has made African navies to lag behind as compared to their Western, Asian and Middle-Eastern counterparts.

The Canadian navy developed a method to rank world navies called ‘Leadway Strategy’ in 2002 projected to deduce top ranking navies in the year 2020. However, due to the constant changing events in today’s military domain, African Military Blog is going to use a different approach so as to properly integrate all aspect of naval warfare so that no nation’s navy would be at a disadvantage due to lack of equipment.

Following Leadways strategy method, Rank 1 is the most powerful group of navies while Rank 9 group of navies are the least power. Our readers are encouraged to read more about Leadway strategy here.

According to a DefenceWeb article published in 21 January, 2010 on Leon Englebrecht he reported that Rear Admiral (rtd) Chris Bennett of the United States Navy noted that this method of ranking is

“over-complicated and there are far too many different levels”.

African Military Blog adopted a system of ‘roles’ and ‘capabilities’ for ranking while also considering equipment type and operational experience. All contenders are placed in a particular group which are:

A ‘Blue Water Navy’ is a navy that has the ability to perform all aspect naval operations. They can travel, navigate and support naval operations deep in the ocean. A navy with Blue Water Capabilities has the support systems and infrastructure to travel unhindered to any part of the world’s waters.

According to the book The Great Wall at Sea: China’s Navy Enters the Twenty-First Century authored by Cole, Bernard D. in 2001,

A blue-water navy implies force protection from sub-surface, surface and airborne threats and a sustainable logistic reach, allowing a persistent presence at range. A hallmark of a true blue-water navy is the ability to conduct replenishment at sea (RAS), and the commissioning of underway replenishment ships is a strong sign of a navy’s blue-water ambitions. While a blue-water navy can project sea control power into another nation’s littoral…

For instance, the South African Navy can travel and support its stealth frigates in any location on Earth using its Fleet Replenishing Ship (AOR) SAS Drakensberg. In an attempt to showcase its Blue Water Capabilities, the South African Navy in May 1990 sent the Drakensberg to accompany two of its missile boats SAS Jan Smut and Hendrik Mentz on a diplomatic mission to Taiwan for bilateral exercise and training without any port stops.

A Navy can be called ‘Green Water Navy’, if it has the ability to project it’s naval operations far beyond it shores but is still limited in it deep ocean operations. A Green Water Navy can travel and navigate long distance but can only do so in a limited time due to its lack of deep water operations support infrastructures and platforms. For instance, the Nigerian Navy can send one or two of its ‘Long range’ Hamilton class ships across the Atlantic Ocean to Australia on a voyage but it cannot support a combat or training exercise on the Atlantic Ocean since it does not possess any Fleet Replenishing Ship (AOR) such as oilers and food resupply vessels.

Professor Geoffrey Till and Patrick C. Bratton opined in their 2012 publication that, “Sea Power and the Asia-Pacific”

Most Green Waters Navies lacks the supply chains and air cover which limits their power projection capacity to within a few kilometers away from their home shores.

This are navies that are primarily focused on littoral warfare. They usually excel in ‘Swarm attacks’ using numerous small boats to overwhelm an opponent. The major type of ships Brown Water Navies possesses are mainly small gunboats and patrol ships. Their primary role includes; 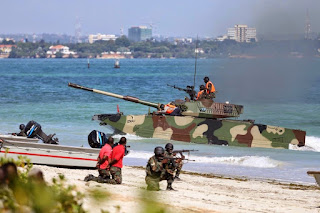 Examples of a Brown Water Navy

This is nothing more than a  maritime law enforcement force. A Constabulary Corp possesses no credible deterrence platforms neither do they have any war-fighting capability or skills. Its main role is to safeguard the seaports and harbors from criminals and other vices.

Examples of a Constabulary Corp

5. African countries with no Navy

The Top 10 Most Powerful Navy in Africa are: