Germany’s first real-time test of electrified trucks fed via overhead cables amid heavy motorway traffic has begun near Frankfurt. The Environment Ministry hopes the project could contribute to climate-neutral haulage.

A project to electrify peak-use stretches of Germany’s motorway network took its next step Tuesday, with a first hybrid electric-diesel truck merging into regular four-lane traffic flows on the Autobahn (motorway) 5 between Darmstadt and Frankfurt.

The five-kilometer (3-mile) eHighway stretch will be tested in both directions until 2022 using electricity from renewable sources, according to Hesse state’s transport department, Hessen Mobil, after years of off-highway trials involving the engineering giant Siemens.

The trucks run on electric motors when connected to the overhead lines, and a hybrid system when they return to a traditional road. Sensors detect when the overhead wires are available.
Siemens says its eHighway system combines the efficiency of electric rail with the flexibility of trucking. Another benefit is a sharp reduction in emissions of CO2 and nitrogen oxides.

Loading...
Trucks on a section of road used to test the eHighway system in Germany.

Siemens argues that the system can be integrated with existing road infrastructure, making it a practical way to reduce emissions and energy consumption in places where railways aren’t feasible.
The section of road opened Tuesday is part of a crucial link between Frankfurt airport, a global freight hub, and a nearby industrial park. Two more stretches of highway with the system will open soon.
The German government spent €70 million ($77 million) to develop trucks that can use the system. Siemens said that a truck owner could save €20,000 ($22,370) on fuel over 100,000 kilometers (62,137 miles). 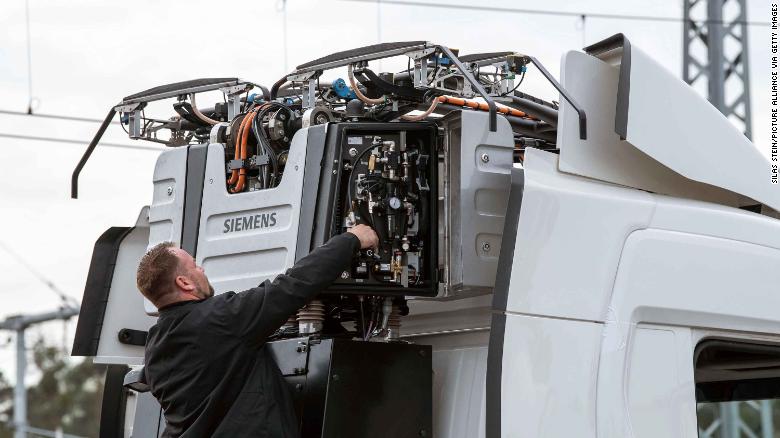 A technician works on a big rig before the tests commence.

Truck transportation is the world’s fastest growing source of oil demand, according to the International Transport Forum, which is part of the Organisation for Economic Co-operation and Development.
According to the group, road transportation of goods will also account for 15% of the projected increase in global CO2 emissions until 2050.
Slashing carbon emissions from transportation including freight is a key part of the 2015 Paris Climate Agreement, which aims limit global warming to well below 2 degrees Celsius above pre-industrial levels.
Projects like the one in Germany could be part of a solution that includes increased railway and electric vehicle use.
“Electrified trucks are particularly efficient solution on the road to carbon-neutral transportation,” said Rita Schwarzelühr-Sutter, state secretary at the German Federal Ministry for the Environment.
Tests and demonstrations of the eHighway technology have also been conducted on a smaller scale in Sweden and near the US ports of Los Angeles and Long Beach.
Loading...
44
SHARES
ShareTweetGet Stories like this
PinterestGoogle