When nature calls, you answer. However, if you’re a woman and feel like peeing when far away from a toilet, it can be quite a challenge. Why Not anymore.

A Kenyan woman has come up with an innovative solution to enable women pee while standing.

Dubbed the Susu Cup, Njeri Muthaka has been campaigning for the peeing cup since last year. In an exclusive interview with The Nairobian, Njeri opened up on what led her to advocate for the use of the rubber device.

ALSO READ:  Women Need More Sleep Than Men Because Their Brains Work Harder, According To Science

According to Njeri, the Susu Cup can play a key role in prevention of urinary tract infections in women.

“I have enjoyed the convenience and health aspect of this female urination cup. Knowing what women go through after they use dirty toilets, I have decided to enlighten women about it.

“I tell men this is a silly gift to their lovers than can go a long way in keeping them away from urinary tract infections. These infections are messy and those who have gone through this ordeal know what I am talking about,” she told the publication.

Peeing in the bush

“We too want to urinate comfortably, whistling without undressing a lot. With it, we can even share urinals with men,” she said.

The Susu Cup reportedly costs Sh200 and according to Njeri, “there is no spill if you use it correctly.

“After use, you just shake or rinse it, fold and pack it in your bag but later wash it with soap.”

They are mostly used for medical reasons, outdoor activities and in the armed forces. 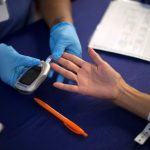