President of The Gambia Adama Barrow over the weekend relocated to the official residence after 10 months in charge of the tiny West African country.

The housing complex known as ‘State House,’ was previously occupied by former leader Yahya Jammeh who is currently on exile in Equatorial Guinea.

Barrow until now had been residing in a hotel and later a state residence in the town of Fajara serving as his office. Photos shared by a local journalist showed Barrow’s arrival at the premises where a guard of honour was mounted for him. 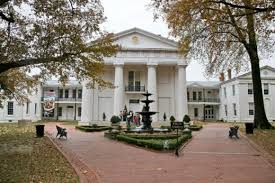 Since Jammeh left the country in January 2017, the premises was deemed to be unfit for Barrow with different reports stating that there were stash of arms and chemical weapons hidden there.

The ECOWAS regional force took over the building at a point to ensure its safety before the relevant authorities set out to renovate it for president Barrow’s use.

Jammeh was still bent to hold on till ECOWAS readied a force to oust him when his mandate expired in January 2017. Last minute mediation by Presidents of Guinea and Mauritania, however, managed to get Jammeh to leave power and to leave the country.