South Africa and Kenya are expected to conclude several bilateral agreements that will expand and deepen the partnership between the two countries during the first quarter of this year.

This was revealed by Kenyan President Uhuru Kenyatta after his meeting with his South African counterpart‚ President Jacob Zuma‚ in Durban on Thursday. 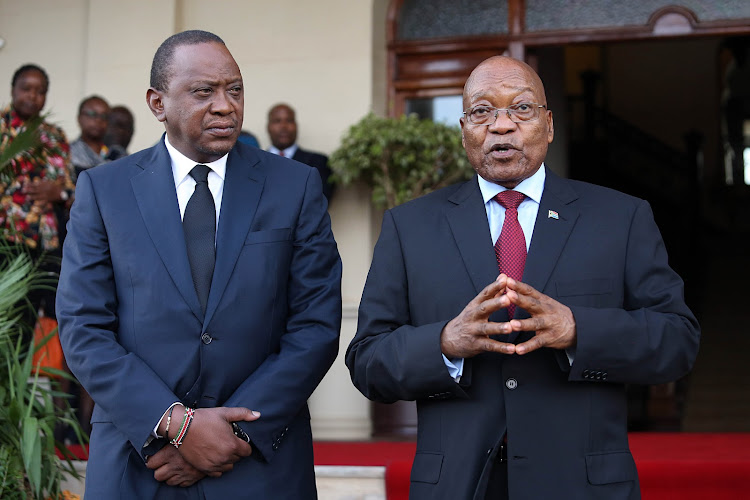 Kenyatta‚ who is on his first working visit to South Africa after being re-elected in a controversial election in August last year‚ will also attend the ANC’s 106th year celebrations in East London on Saturday.

Kenyatta and Zuma held a three-hour-long bilateral meeting at the Edwardian-style presidential residence Dr John Dube House while thongs of journalists and photographers waited patiently for them outside.

The two presidents told the media that they had discussed a number of issues which included deepening and strengthening relations between the two countries.

Kenyatta said they also discussed how they can increase trade between the two countries and connectivity on the African continent which is critical to industrial development.

“We talked about how we can increase connectivity on our continent because that is something that is critical to our industrial development which will enable us to create jobs that our young people require.”

He also briefed Zuma on the situation in conflict-ravaged South Sudan and the slave trade in Libya.

“We had a good opportunity to exchange on those matters as well as lay the groundwork for my state visit which will be sometime in the first quarter of this year where we hope to conclude some very strong agreements of mutual benefit and that will help expand and deepen the partnership between our two countries‚” said Kenyatta.

He said he was also happy to participate in the ANC’s birthday celebrations.

“I am really looking forward to concluding a number of bilateral agreements when I am back for the state visit‚” said Kenyatta.

Zuma said he was also looking forward to Kenyatta’s state visit as it would strengthen relations between the two countries and take them to another level.

“We thought that when we meet at that time we don’t want to raise the issues that would have been raised and ready to conclude. We also felt that whilst he is here he could also participate in the birthday of the ruling party because we had good discussions on how we make our parties work together so that we take our people along with us and our policies‚” said Zuma.

He said the kind of new slave trade taking place in Libya “was an issue that Africa cannot allow to happen”.

“It’s an issue that we believe we need to give serious attention. We talked about the situation.”

Zuma said they had also talked about the Kenyan election in which Kenyatta‚ who has been in office since 2013‚ was re-elected after his rival‚ Raila Odinga‚ boycotted the election.

Kenyatta was re-elected for a second term after securing more than 98% of the vote in a highly-contentious rerun election that was boycotted by his main opposition rival.

The rerun followed a landmark decision by the country’s Supreme Court to nullify the previous election which Kenyatta also won‚ citing irregularities. “I am sure you are aware that whilst in Kenya the party led by the president won elections with everybody saying this was free and fair but the courts produced a finding that was not in keeping with everybody else in looking at the elections‚” said Zuma.