In his book ‘Society must be defended’, written in 1976, Michel Foucault speaks about historical revisionism, hinting to a an earlier statement made by Winston Churchill who said that “History is written by the victors”.

These discussions are still relevant today. A significant amount of historical narrative is still being written by those with the most power. If you walk into any of the world’s most powerful institutions (government, academic or corporate) you will identify that the group that are shaping history are Euro-American men. I’m not saying that this group is intentionally shaping history for the rest of us, or that other groups aren’t contributing in large measures to what future generations will consider history. Rather, I want to highlight that the power of writing one’s own history seems to be what history making is all about. Knowing the sources of stories that shape our lives, helps to combat the danger of the single story.

Africa is again a continent of international interest, which is good, but who is writing the current narrative about Africa, also that which is about ‘rebranding’ the continent? I think the source of the information that we consume, is even more important than the information itself.

On the other hand it’s worth knowing that magazines like FAB magazine, are African owned, managed and produced. As a regular contributor to FAB, I am pleased to be involved in a project that is by Africans for Africans. Another example of home-grown storytelling is Spielworks, a Kenyan media content producer.

Next week I’ll be posting about 7 African male icons but first up are 7 women (out of many more and this is a great resource for women leaders in Africa).

Years before the second wave of feminism began to take form in the West, there was a woman making activist waves in Nigeria. She was a woman nationalist named Funmilayo Anikulapo-Kuti. Her feminism and democratic socialism lead to the creation of The Abeokuta women’s union (AWU) and later Women’s International Democratic Federation (WIDF), organisations and movements that aided Kuti to promote women’s rights to education, employment and to political participation. When king Alake Ademola of Egbaland wanted to impose taxes on women, Kuti and the AWU clan went to protest using the slogan ‘no taxation without representation’. They were not equal members of society and were strongly opposed to paying taxes until the injustices were rectified. As the women protested outside the Alake’s house, they sang in Yoruba:

“Alake, for a long time you have used your penis as a mark of authority that you
are our husband.
Today we shall reverse the order and use our vagina to play the role of husband.”

Their unified actions resulted remarkably in the king’s abdication. 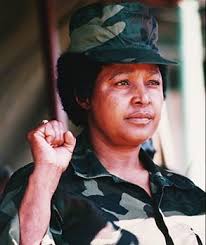 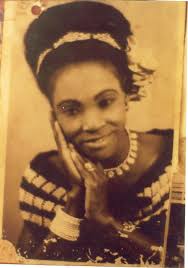 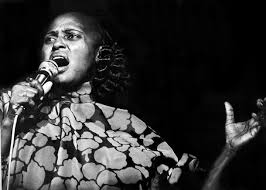 Another prominently outspoken and visible opponent of South Africa’s apartheid regime was Miriam Makeba, also known as Mama Africa, and the Empress of African song. Makeba was not only involved in radical activity against apartheid but also in the civil rights movement and then black power. In fact, she was married (albeit briefly) to the Black Panther leader Stokely Carmichael, who was her fourth husband out of five. She said:

Everybody now admits that apartheid was wrong, and all I did was tell the people who wanted to know where I come from how we lived in South Africa. I just told the world the truth. And if my truth then becomes political, I can’t do anything about that. 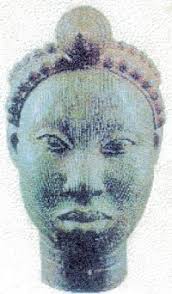 6. Queen Nzinga –  The reformist
Also knows as Queen Jinga, she is known to have assigned women to important government offices in present day Angola. Two of her war leaders were reputedly her sisters, her council of advisors contained many women, among others her sisters, Princess Grace Kifunji and Mukumbu, the later Queen Barbara, and women were called to serve in her army. Nzinga organized a powerful guerrilla army, conquered some of her enemies and developed alliances to control the slave routes. She even allied with the Dutch to help her stop the Portuguese advancement. After a series of decisive setbacks, Nzinga had to negotiate a peace treaty with the Portuguese, but still refused to pay tribute to the Portuguese king.

Lady Khama was the wife of Botswana’s first president, Sir Seretse Khama. She was born in Blackheath in south-east London and was the daughter of a retired Indian Army officer. Her marriage to the man who would become Botswana’s president was met with disapproval in Botswana, it enraged apartheid South Africa, and embarrassed the British government. Lady Khama was an influential, politically active first lady during her husband’s tenure as president. When Seretse Khama died in 1980, many expected that Ruth Khama would return to London. But instead she became president of the country’s Red Cross. She said:

“I am completely happy here and have no desire to go anywhere else, I have lived here for more than half my life, and my children are here. When I came to this country I became a Motswana.”

A film, A Marriage of Inconvenience, was made in 1990 about the Khamas.

By the way, I am working with an NGO called Arise Nigeria Woman, and we are focusing primarily on getting women involved in nation building, particularly in the upcoming elections in Nigeria. You can help our work by signing up here and also there is a post on the site also about historical African women.