Serena Williams is justifiably not here for your Meghan Markle questions, okay? The tennis champion and casual living legend competed in the Australian Open on Monday, when a reporter went ahead and asked about Meghan and Harry’s decision to step down from senior royal duties. Which, to be clear, is a question that has nothing to do with tennis!

According to The New York Times’ Ben Rothenberg, the reporter asked, “Your good friend, Meghan Markle, who attended your last two slams, and Harry, have taken a move, a stance that many people think is extraordinary and historic. What are your feelings about that? Have you spoken to her?”

Serena’s response? Completely iconic: “Yeah, I have absolutely no comments on anything with that. But good try. You tried. You did good.” 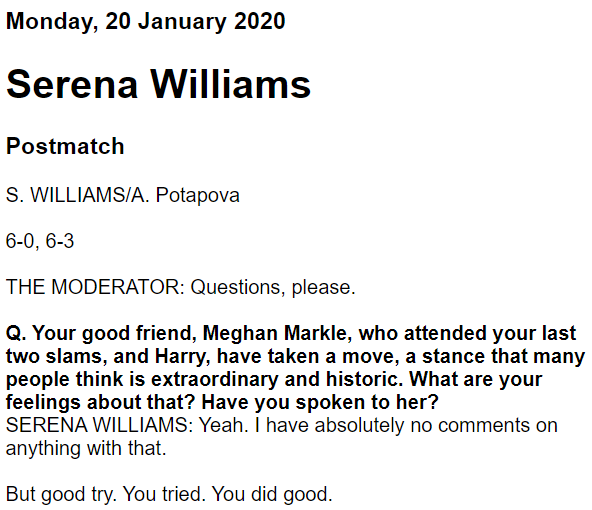 As a reminder, Prince Harry and Meghan Markle will no longer be using their HRH titles as they step away from senior royal duties and spend the majority of their time in North America—an absolutely historic moment for the royal family. Prince Harry gave his first public remarks about the decision last night, saying:

“I also know you’ve come to know me well enough over all these years to trust that the woman I chose as my wife upholds the same values as I do. And she does, and she’s the same woman I fell in love with. We both do everything we can to fly the flag and carry out our roles for this country with pride. Once Meghan and I were married, we were excited, we were hopeful, and we were here to serve. For those reasons, it brings me great sadness that it has come to this. The decision that I have made for my wife and I to step back, is not one I made lightly. It was so many months of talks after so many years of challenges. And I know I haven’t always gotten it right, but as far as this goes, there really was no other option.”