Tiger Woods completed a comeback from personal and professional adversity on Sunday, capturing his fifth Masters title and his 15th major tournament with a victory that snapped a decade-long championship drought and instantly returned him to the top of the sports world.

It was a monumental triumph for Woods, a come-from-behind victory for a player who had had so much go wrong on the course and off after his personal life began to come apart on Thanksgiving night in 2009.

As such, it was only fitting that after he walked off the 18th hole on Sunday, his one-stroke victory secure, his path to the official scoring office was gridlocked with well-wishers, including many of the golfers he vanquished over four grueling days at Augusta National Golf Club.

Woods triumphed in almost stoic fashion, playing with shrewdness and determination over the final stretch of holes while the other players who were grouped with him on the leaderboard took turns succumbing to the pressure of trying to win the Masters.

And although Woods did bogey the final hole, he did so with a two-stroke lead, victory in sight and the knowledge that he could give one of those strokes back and still win the tournament.

Only when he tapped in his final putt did Woods let loose with a joyous shout that revealed how much the victory meant to him. 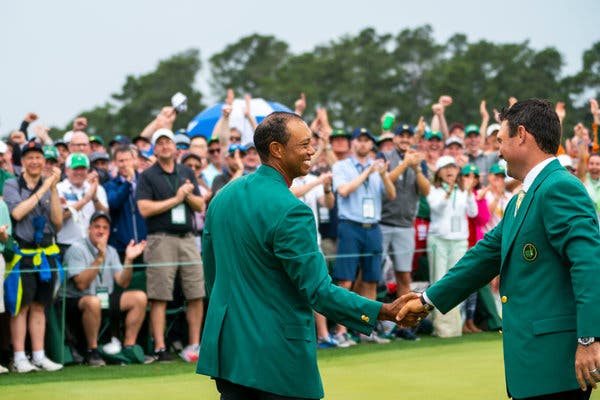 At 43, Woods became the second-oldest winner of the Masters, behind Jack Nicklaus, who won here in 1986 at age 46 and who holds the record for victories in major tournaments, 18. And Woods’s victory immediately reverberated beyond golf and, for that matter, sports.

The win even led to a rare moment of agreement between President Trump and former President Barack Obama. “What a fantastic life comeback for a really great guy!’’ the President said on Twitter. “To come back and win the Masters after all the highs and lows is a testament to excellence, grit and determination,’’ Obama posted.

Woods’s victory had an epic feel to it. At Augusta, on perhaps the sport’s biggest stage, was its seminal figure, suddenly back on top, which is where he was a decade ago when everything suddenly went sideways for him.

What followed was a long, painful period of his life, in which his body repeatedly broke down and his marriage collapsed. But after prevailing on Sunday, Woods is back in the pantheon of the sports world’s biggest stars, back on a level with LeBron James, Serena Williams and Lionel Messi, back in a space he entered with his first Masters victory in 1997, when he was a skinny 21-year-old a year removed from Stanford who declared “Hello World” in a classic Nike commercial.

“It’s unreal for me to experience this,’’ Woods said in a television interview after his victory on Sunday. “It was one of the hardest I’ve ever had to win just because of what’s transpired the last couple of years.”

The long drought Woods endured between major championships — his previous one came at the 2008 United States Open — would have once seemed inconceivable. The same could be said for the 14 years it took for Woods to finally win his fifth title at Augusta National, a course so suited for his game that Nicklaus once predicted that Woods would collect more than the combined 10 Masters titles that he and Arnold Palmer won there.

And yet there was an eerie familiarity to what took place on Sunday. Woods played his final round before crowds that were 10 to 12 deep for hundreds of yards at every hole — from tee box to green. 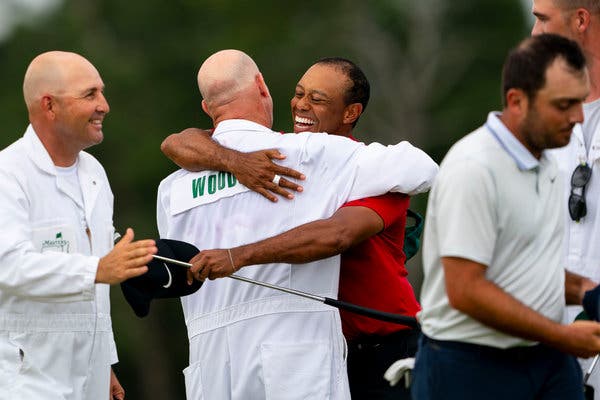 In a sense, though, the gallery that really mattered to Woods was much smaller and consisted of his mother, Kultida, and his two children — his 10-year-old son, Charlie Axel, and his 11-year-old daughter, Sam Alexis. His children were among the first to greet him once his triumph was complete. Neither had been born when Woods basically ruled the sport.

They essentially knew of their father’s exploits from photographs and other people’s memories — and they knew golf mostly as a game that had caused their father terrible distress. But not anymore.

The years between Woods’s 14th and 15th victories in major tournaments included an immense number of setbacks, although his struggles actually date to the 2006 death of his father, Earl, who was his soulmate and putting guru. Two years later, Woods won the United States Open victory on a left leg in need of surgery, but a year after that, a marital dispute about his philandering led to a car accident and a succession of lurid headlines. A divorce followed in 2010.

The ensuing years brought repeated back operations, which led to an addiction to painkillers and culminated in pain so searing that, before an operation in 2017, he questioned whether he could play professionally again. That year, he hit rock bottom when he was charged with driving under the influence after he was found in a painkiller haze at the wheel of his car with the motor running.

Woods said that when he was down, he gained strength from what he described as his children’s “infectious happiness.”

“To have my kids here, it’s come full circle,” he said after Sunday’s final round. “My dad was here in ’97, and now I’m the dad with two kids there.”

With a closing round of two-under-par 70, Woods edged two other major champions — Dustin Johnson and Brooks Koepka — as well as Xander Schauffele, a 25-year-old from San Diego. Woods’s 72-hole score of 13-under 275 was one shot better than his total in his 2005 victory at Augusta. And it was the first time that Woods, who started the day two strokes off the lead, had come from behind in the final round to win a major tournament.

Tiger Woods, in his 22nd Masters appearance, closed with a final round of 70 and finished 13 under par at 275.CreditDoug Mills/The New York Times 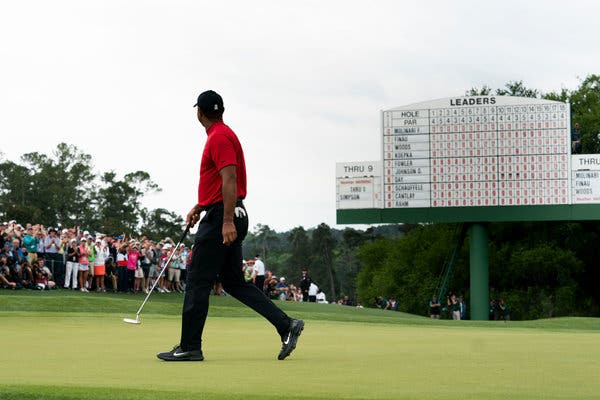 Woods’s children were also with him last summer when he saw the first real glimmers of hope in his comeback — at the British Open. They saw him play his way into contention over the first three days of that tournament and then briefly take the lead in the final round on his way to a tie for sixth. Afterward, he told his children that he hoped that they were proud of how he fought and refused to give up.

At Augusta, his children arrived on Saturday night, providing extra motivation for Woods to prevail. Parenthood has imbued Woods with extra patience, which came in handy on the front nine on Sunday, when he made back-to-back bogeys while elsewhere on the course players were leapfrogging over one another and into contention with birdies and eagles. Indeed, late in Sunday’s round, 10 players, including Woods, were within two strokes of the lead.

But amid that intense grouping, it was Woods who found a way to finish first.

Woods’s first Masters title, in 1997, by an astounding 12 strokes, left an indelible mark on the sport. He became the first African-American — Woods is also half Thai — to win golf’s most exalted championship. He reshaped the game, making it more athletic and more popular — especially outside the United States.

In 1997, the first person at Augusta to greet Woods as he came off the final hole in triumph was his father, whose grand plan Woods had realized with his victory. His mother was there, too. She was also on hand Sunday, but after her embrace, Woods took a few steps forward and was smothered by his second family — the other players, some of whom were almost young enough to be his children.

Sunday’s final round was moved up five hours to avoid an ominous forecast for later in the day. Players were grouped in threesomes to speed play. Woods took the lead for good on the par 5 15th hole with a birdie putt. And when he then arrived at the 16th tee, a familiar face and friend — the record-setting swimmer Michael Phelps — was standing close enough to touch him.

It was Phelps who had spent two months in a treatment center in 2014 after trying to self-medicate with alcohol. It was Phelps who became an informal counselor to Woods after the 2017 painkiller episode. And it was Phelps who was on hand as Woods closed out his comeback with his final putt.

And as he then put on the winner’s green jacket for a fifth time, he said something everyone knew but might have forgotten: “It fits.”