When a Georgia woman recently scheduled an appointment at Lucy’s Dominican Hair Salon in Marietta, she assumed that the blow out she’d asked for would consist of a simple shampooing, conditioning, and of course, blow drying.

Though she left the salon satisfied, three days later, she noticed something amiss when she washed her hair at home in preparation to style it into twists. For some reason, her hair refused to curl as it naturally would and large chunks appeared to have been unusually straight. When she called the salon about just what they had done to her hair, they informed her that chemical relaxer had been added to the shampoo without her knowledge.

As anyone with naturally curly, kinky hair will explain to you, usingany amount of relaxer isn’t something that you do casually. The active ingredients in most relaxers are alkaline chemicals like lye or ammonium sulfite that have a pH somewhere between 10 and 14. The caustic properties of these substances break down hair’s protein structure, resulting looser, straighter curls. Cases in which relaxer is left in for too long can result in severely damaged hair and irritated skin. 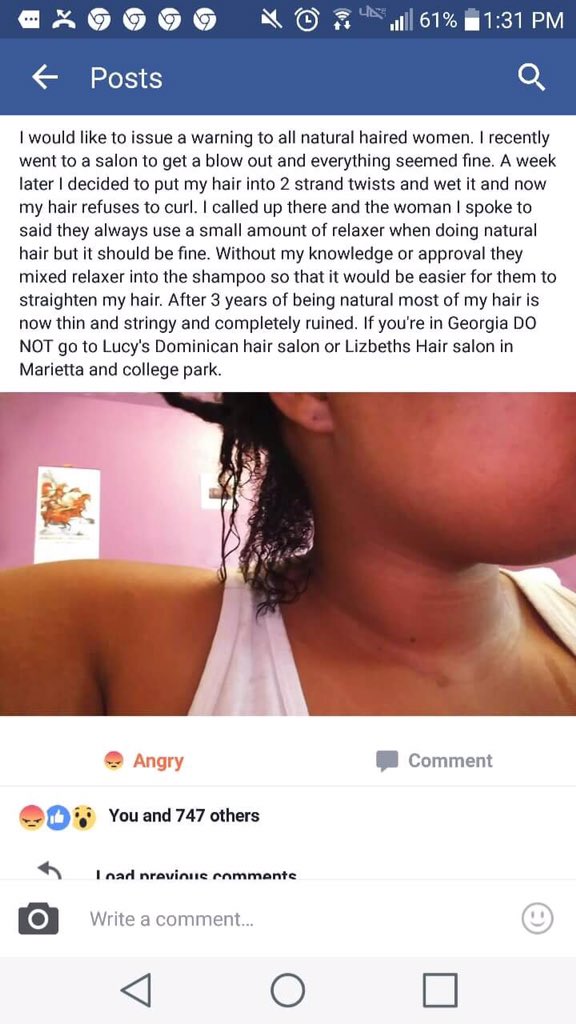 According to the woman, a representative from the salon informed her that it was standard procedure to mix a small amount of relaxer into the shampoo used for people with natural hair and that it wasn’t cause for concern.

I reached out to the woman who originally posted the screenshot to Twitter, but she was not immediately available to confirm the identity of the original poster. When I spoke with someone from Lucy’s salon this afternoon asking about whether it was their policy to mix relaxer in with their shampoo, I was informed that the business was not currently commenting on the story.

Lisbeth Dominican Hair Salon, which the woman also called out in his original post, made a point of posting to Facebook that they did not make a practice of mixing relaxer in with shampoo.

“This is one of the NO-GO’s for my naturalistas,” Yelp user Tosha W. wrote in a critical review of the salon prompted by the screenshot. “Mixing a perm in with the shampoo without consent is just as tacky as a hair salon can get.”

In Tosha’s opinion, the salon’s policy of mixing relaxer in with its shampoo had a lot to do with the the Dominican Republic’s complicated and often uneasy relationship with blackness especially when it comes to black hair. Dominican salons are renowned in many black communities for their ability to straighten curly hair for long stretches of time.

Back in the DR itself, straight hair is often seen as one of the markers of social and racial superiority that Dominicans of Spanish descent use to differentiate themselves from Dominicans of African descent and people from neighboring Haiti.

“In a country of complex racial dynamics, where straightened hair is a social currency and billboards depict curly-haired women with the headline ‘your hair deserves better,’” writer Morgan Miller said of her time living in the DR. “Natural or curly hair, colloquially referred to aspelo malo (bad hair—also a term used in the black American community), is sometimes viewed as a marker of Haitian identity.”