Ramaphosa said that South Africa was “enormously diminished” by the death of Tutu who along with Nelson Mandela was described as an “outstanding leader”.

“A lot of great things can be said about him. His global status, the love that he was and is being showered with from across the various countries in the world just speaks volumes of what he stood for and what people see… saw in him as a great leader. ” Ramaphosa said.

The president’s visit follows a visit by other high-ranking ANC members who gathered at the Tutu home earlier to pay their last respect to the hero.

The world has been morning the churchman since his demise was announced on Sunday December 26. Queen Elizabeth II, US President Joe Biden, Pope Francis and former US president Barack Obama have all paid their last respect eulogized the ant apartheid icon.

Tutu is survived by his wife 66 year old Leah Tutu and their four children.

South Africa is holding a week of mourning for the Nobel Peace Prize winner and fierce opponent of the country’s apartheid regime, who died Sunday at the age of 90. 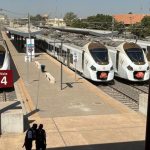