Donald Trump’s immigration plan is set to be announced later this week. And if previous comments are any indication, the Republican presidential contender said he plans to focus on deporting criminals, similar to the current strategy of the Obama administration.

“On Day One, I am going to begin swiftly removing criminal illegal immigrants from this country,” he said at Iowa Sen. Joni Ernst’s Roast and Ride event Saturday in Des Moines, saying he would not focus on the 11 million undocumented residents who have lived in the U.S. for a long time without incident.

Trump has not given specific details about his immigration policy plans, but is expected to explain more Wednesday.

Based on statements so far, Trump’s plan to remove the undocumented immigrants who have committed crimes is similar to what President Obama declared in 2014. Here’s a look at some of the numbers:

How many people have been deported under Obama?

President Barack Obama has often been referred to by immigration groups as the “Deporter in Chief.”

Between 2009 and 2015 his administration has removed more than 2.5 million people through immigration orders, which doesn’t include the number of people who “self-deported” or were turned away and/or returned to their home country at the border by U.S. Customs and Border Protection (CBP).

How does he compare to other presidents?

In fact, they have deported more than the sum of all the presidents of the 20th century.

President George W. Bush’s administration deported just over two million during his time in office; and Obama’s numbers don’t reflect his last year in office, for which data is not yet available. 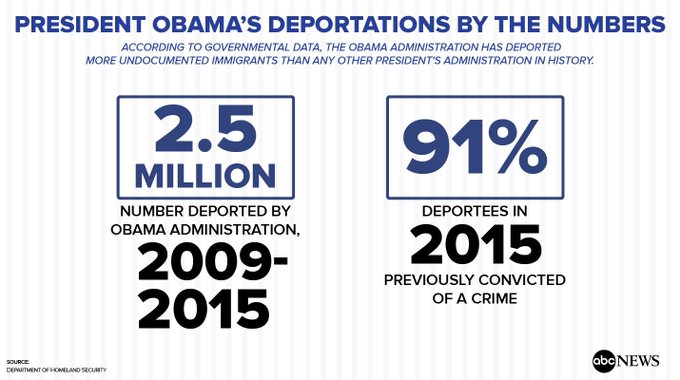 Who is being deported?

President Obama directed U.S. Immigration and Customs Enforcement (ICE) to focus on criminals, not families, during his November 2014 executive action on immigration.

According to their website, “ICE has continued to increase its focus on identifying, arresting, and removing convicted criminals in prisons and jails, and also at-large arrests in the interior.”

In fiscal year 2015, 91 percent of people removed from inside the U.S. were previously convicted of a crime.

The administration made the first priority “threats to national security, border security, and public safety.” That includes gang members, convicted felons or charged with “aggravated felony” and anyone apprehended at the border trying to enter the country illegally.

That includes “aliens convicted of three or more misdemeanor offenses, other than minor traffic” violations, as well as those convicted of domestic violence, sexual abuse, burglary, DUIs or drug trafficking.

Who is not being deported?

With the focus on criminals and not families, the administration has moved away from those living and working in the U.S. without a criminal history.

“Felons, not families. Criminals, not children. Gang members, not a mom who’s working hard to provide for her kids. We’ll prioritize, just like law enforcement does every day,” Obama said in November 2014 when announcing his executive action on immigration.

And while he tried to provide relief and a way “out of the shadows” for those without criminal histories with his immigration action, that was eventually stricken down by the Supreme Court not issuing a decision on the case, thereby upholding the lower courts action.

But by refocusing on criminals most families who are living and following the law are not targets for deportations.

What about raids against mothers and children?

Many of these unaccompanied children and mothers with children are fleeing violence in central America—coming from the northern triangle of Guatemala, El Salvador and Honduras, some of the most dangerous countries in the world.

Many of the people migrating from that area to the U.S. claim refugee status and, if they can prove real harm will result in their being returned, they are allowed to remain until their case is heard.

There are critics, however, who state that many are not getting a fair shot at claiming refugee status and are being returned too hastily.