Proponents of Uganda’s Anti-Homosexuality Act 2014 have denounced homosexuality as an import from the West. Yet every June, hundreds of thousands of Christian pilgrims in Uganda commemorate a set of events, the hegemonic textual accounts of which pivot around the practice of native ‘sodomy’. According to these accounts, the last pre-colonial Kabaka (king) Mwanga of Buganda ordered the execution of a number of his male Christian pages in 1886 when, under the influence of their new religion, they refused his desire for physical intimacy. These events have assumed the place of a founding myth for Christianity in Uganda as a result of the Catholic Church’s canonization of its martyred pioneers.

Africa is generally bigoted of homosexuality to such an extent that 30 of the continent’s 54 countries have criminalized the action; 11 others have no law against homosexuality however there is high narrow mindedness. In 5 nations, homosexuality is lawful yet there are no other protections.

Numerous Africans and their governments contend that homosexuality is an imported product from the West, that is, the practice is “un-African”, if there is any word like that.

Yet, historians and LGBT activists say that homosexuality existed in African societies and belief systems before Western colonization. One notable person they often cite is King Mwanga ll of Buganda.

Mwanga was known to be relentless. He had an especially tenacious relationship with the British, specifically, Christian missionaries, who were a threat to his rule not only in their attempts to establish themselves deeper in Buganda but to change beliefs and values.

Historians say that Mwanga II took a much more aggressive and often violent approach to foreign threats to his power than his father who played-off the influence of Catholics, Protestants, and Muslims. He often expelled missionaries and insisted that Christian converts abandon their faith or face death.

A year after becoming king at the age of 16, he had an incoming archbishop, James Hannington, assassinated on the eastern border of Buganda. In the same year, he killed a number of his own men in his harem for refusing his advances.

Sources say that the “generally accepted reason for the brutal killings, often including some form of slow torture with fire, is that the 45 young men were killed because they refused to sleep with the king. They refused because of their new faith and the encouragement of the missionaries.” 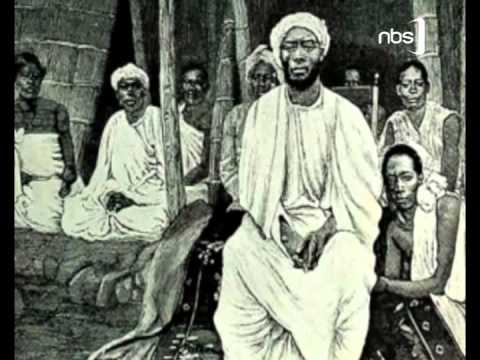 Another version says that “Twenty-two of the men, who had converted to Catholicism, were burned alive at Namugongo in 1886 and later became known as the Uganda Martyrs. Among those executed were two Christians who held the court position of Master of the Pages, Joseph Mukasa Balikuddembe and Charles Lwanga. They had repeatedly defied the king by rescuing royal pages in their care from sexual exploitation by Mwanga which they believed contrary to Christian teaching.”

Some 22 of the men have been canonized as saints and Martyrs of Uganda since 1964.

Mwanga’s murders and continued resistance did not come without consequence. In 1888, the British backed a rebellion by Christian and Muslim groups who supported Mwanga’s half-brother. Mwanga lost and escaped, only to return and negotiate with the British where he decided to hand over some of his sovereignty to the British East Africa Company.

In 1894, Mwanga agreed to make Buganda a British Protectorate. In 1897, the ever relentless Mwanga changed his mind and declared war on the British, launching an attack where he was defeated. He eventually fled to German East Africa, modern-day Tanzania, where he was arrested. Still, he returned to Buganda with a rebel army in 1898, only to be defeated and exiled to Seychelles.

In an interesting twist of faith, he was received into the Anglican Church while in exile and was baptized with the name Danieri (Daniel). He died at the age of 35 and his remains were repatriated and buried at Kasubi in 1910. It is reported that Mwanga had 16 wives.

Finally, it is worth noting that some sources say Mwanga learned this behavior from Arabs who were prominent in Buganda during the time. Professor Sylvia Antonia Nannyonga-Tamusuza cites in her book, Baaskisimba: Gender in the Music and Dance of the Baganda People of Uganda that, “During Mukabya’s reign, after the Arabs and other foreigners had come to Buganda, promiscuity became rampant…those Arabs also introduced another bad behavior, that of fellow men making other men their women [wives]… Mwanga was often given to the practice of sodomy, allegedly learnt from Arabs.”