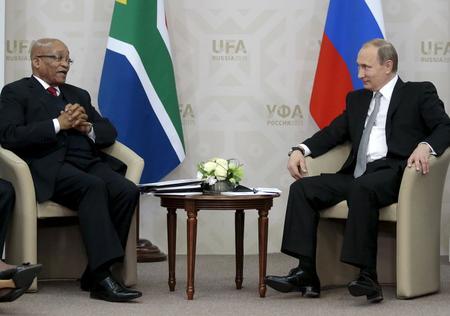 JOHANNESBURG (Reuters) – South Africa and Russia signed two memoranda of understanding on nuclear power cooperation on Wednesday, part of efforts by Africa’s most advanced economy to lessen its reliance on coal and overcome power shortages that threaten economic growth.

They will also include programmes for training specialists in South Africa’s nuclear industry.

South Africa is considering using reactors from Russia’s Rosatom and Westinghouse for its planned 9,600 megawatt nuclear fleet expansion, an energy advisor to the government said in June.

The country plans to build six new nuclear power plants by 2030 at an estimated cost of between 400 billion rand and 1 trillion rand ($32 bln and $80 bln).

Critics contend South Africa cannot afford the price tag against the backdrop of rising debt and sluggish economic growth, which is constrained by power shortages that trigger periodic rolling blackouts.

The government has said South Africa needs to not only expand its capacity but also diversify its power mix from coal, which provides over 85 percent of the country’s energy needs.