Pep Guardiola, the Manchester City coach, has praised the goal-scoring efforts of Kelechi Iheanacho, saying that his position and sense for goals are rare at his age. Guardiola said that Iheanacho is a rare talent.

Iheanacho scored City’s second goal in their 3-0 win over Bournemouth and shortly after Guardiola admitted that the second goal helped his side settled into the game properly.

”He has goals in him; that part of his game has never been in doubt. We want him here and he knows it. He hasn’t been getting games as many would have expected but he is just 20 years old”, Guardiola said.

“There are few players of his age in Europe at the moment who are playing for top teams in top league, but you have to give it to him, he’s positioning and goal scoring sense is rare to find among kids of his age”.

Competitions for a spot in Manchester City attack is expected to be fierce when Gabriel Jesus finally joins the team in January, a transfer which could have an impact on Iheanacho’s career at the club. 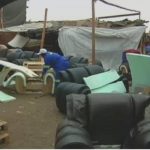