Purple corn is not well known in the United States, but it has been part of the diet of the Peruvian Andes for millennia. The amazing thing about this plant is that although it is identically, botanically speaking, to yellow corn, it produces corn with kernels of deep purple. And like many deep purple vegetables, such as eggplant, purple corn is incredibly good for your health.

You’ll Load Up On Fiber

Purple corn is a high-fiber food, and this is great news because fiber is good for your digestive system as a whole and helps prevent problems like constipation. It has also been associated with improved heart health and can help to lower high cholesterol.

You Get A Ton Of Vitamins And Minerals, Too

The typical American diet can be pretty poor in vitamins and minerals, but when you eat purple corn, you’ll be getting a lot of both. It is rich in zinc, copper, manganese, magnesium, and potassium, as well as vitamin B5, B9, and niacin.

You Will Reduce Your Cancer Risk

Special compounds called anthocyanins give purple corn its color. Researchhas shown that anthocyanins derived from purple corn were able to kill 20% of in vitro (in a test tube) cancer cells and proved to be more effective at this when compared to anthocyanins from other foods, such as elderberries, grapes, and purple carrots.

You Can Fight Obesity

It is estimated that two thirds of Americans are now overweight or obese — but a diet which includes purple corn can help prevent this. In one studywhich looked at the health status of rats feed a very high-fat diet, it was found that those who were also given purple corn extract did not suffer from weight gain in the same way as rats fed this diet without the anthocyanins.

You Will Reduce Inflammation Throughout The Body

A study out of the Tokai Gukuen University in Japan looked at the ways in which purple corn extract could help reduce inflammation. The study took place on laboratory mice and it was found that, when given the extract, their levels of cytokines (an important marker for inflammation) were greatly reduced.

You Will Support Heart Health

The anti-inflammatory and antioxidant properties of purple corn also apparently help to improve cardiac health by reducing the oxidation of fats and lipids that can build up in the arteries and eventually contribute to atherosclerosis and cause heart attacks if left unchecked. In the study on rats mentioned before, the rats fed a high-fat diet as well as the purple corn extract showed not only less oxidation of the fat cells but also a 6% decrease in cholesterol levels.

You Will Improve Your Circulation

Circulation is probably not something you think very much about, but it is incredibly important — and not just for your heart, but for your entire body. Antioxidants in purple corn improve this by stabilizing and protecting the delicate capillaries throughout your body and by prevent abnormal blood clotting.

You Can Decrease Your Risk Of Developing Diabetes

In the high-fat diet study done on the laboratory mice, scientists were also looking at important markers for diabetes in the mice to see if purple corn extract would have any affect on these markers as well. It did. Mice who were given the extract in addition to their high-fat diet did not have hyperglycemia (high blood sugar), hyperinsulinemia (too much insulin in their systems), or hyperleptinemia (leptin in the blood which is an important marker for diabetes).

You Can Promote Kidney Health

Scientists from Hallym University in Korea found that antioxidant properties in purple corn extract were able to prevent the hardening of the blood vessels in the kidneys, a process called glomerulosclerosis which is often associated with diabetes and which can cause kidney failure if left unchecked.

You Will Improve Your Eye Health

Two more important antioxidants found in purple corn are lutein and zeaxathinin. These antioxidants are used almost exclusively by your eyes and high levels of these antioxidants have been associated with decreased chances of developing serious eye disease like cataracts or macular degeneration, a leading cause of blindness. 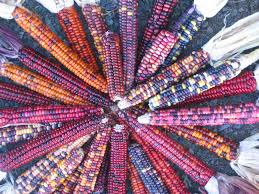 Purple corn has not — yet — really caught on the in the United States. Even so, it is still carried by health food stores, which will also sometimes sell the extract as well. It may be hard to find, but the effort it well worth it because of the many health benefits it conveys!