Nigeria will be the ‘’poorest country in the world’’ by 2037 as global poverty shifts exclusively to Africa amidst decreasing poverty levels in Asia, Latin America and other parts of the world, says former chief economist at Goldman Sachs, Jim O’Neil. Africa’s most populous country will also experience an economic slow-down because of its ‘’dramatic rise in population,’’ unless it proactively commits to higher productivity and increased trade among African countries.

Mr O’ Neil also believes corruption will be the key driver of Africa’s gloomy economic future unless there is a conscious attempt by its leaders to embrace democratic values and principles. At an Association of European Journalists meeting in London, the renowned economist singled out China as the only country in the world that can withstand global economic uncertainties.

US economic dominance, he claims, is also predicted to weaken further because of Trump’s ‘’irrational and emotional approach to economic policy decisions which reflects a twenty year break with reality.’’
Blaming Conservative politics for Brexit, Mr. O’ Neil described Britain’s strategy to seek new trading partners outside the European market to make up for any potential economic loss as a farce, considering the significant economic benefits it will lose from leaving the European single market.
He chastised the UK government for rushing to seek the hand of New Zealand’s as one of its post-Brexit trading partners when such an alliance will bring ‘’nothing’’ to the UK economy. The UK, he said will also find it difficult to fix its post-Brexit economy because it ‘’lacks policy makers’’ with the passion and foresight to address the country’s economic future. 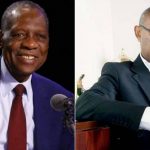