House Speaker Nancy Pelosi’s lectern which was looted by a rioter during the riot at the U.S. Capitol last week, has been returned.

One of the pro-Trump supporters, Adam Johnson was caught on camera grinning and waving while toting Pelosi’s lectern during the siege.

However, on Wednesday, January 13, a staffer was seen in photos wheeling the lectern through the Capitol’s Statuary Hall and to the Rayburn Room, just off the floor of the House of Representatives.

Pelosi (D-Calif.) was expected to speak at the podium later Wednesday, after the House votes on an article of impeachment accusing President Trump of inciting an insurrection in the deadly Jan. 6 riot.

36-year-old Johnson was arrested on Friday January 8 and faces charges including knowingly entering or remaining in a restricted building or grounds without lawful authority and theft of government property. He was released on Monday January 11, on a $25,000 bond.

Following the insurrection, Trump is now the first president in history to be impeached twice. House Democrats impeached Trump in December 2019 charging abuse of power and obstruction of Congress in his dealings with Ukraine. A new Senate trial is expected to begin after Trump leaves office next week. 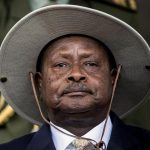