Africans living in Morocco described Morocco’s win against Spain in the FIFA World Cup on Tuesday as a victory and pride for Africa and the Arab world.

Morocco became only the fourth African country to reach the quarterfinals at the biggest soccer tournament in the world by beating Spain 3-0 in a penalty shootout after a 0-0 draw through extra time.

ALSO READ:  Serena Williams Opens Up About Being the CEO of Her Tennis Team and Her Daughter Olympia

“It’s a matter of pride for Morocco, but it’s also a reason for Africa to be proud because since 2010, we did not reach the stage of the quarter-final,” said Serge Tonto, A Togolese student living in Rabat.

The Moroccans were playing in only their second knockout game at a World Cup, an event which is being held in the Middle East for the first time in its nearly 100-year history.

For Fattoumata Jarbi, a Gambian student also living in Rabat, she said: “I had my Moroccan hat with me. I was screaming and jumping in my room when I knew they qualified to the quarter-final.”

In other countries across the Arab world and Africa, people took to the streets to celebrate Morocco’s advance advance in the tournament. 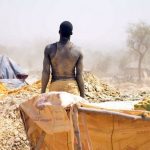