The polemic has ignited Morocco for several days. After the festival of Eid El-Kebir, the meat of some sheep shot down took a disturbing green tint. The Moroccan authorities point to the heat and the lack of hygiene.

Some 670 complaints were officially filed in Morocco in the wake of Eid El-Kebir, on 1 September 2017, for cases of sheep meat whose colour suddenly turned greenish. On September 7, the authorities evoke a “bacterial” contamination to appease the controversy.

In the aftermath of the great Muslim celebration, traditionally marked in each family by the sacrifice of a sheep, photos and videos, showing pieces of greenish carcasses little disgusting, were disseminated in the Moroccan press and social networks.

“The superficial coloring of the meat or its putrefaction is due to a bacterial contamination of pseudomonas type, clostridia, coliform and staphylococcus [contained] in large numbers in the digestive tract of the animal,” said the Moroccan National Office (ONSSA), in a statement released by the MAP agency.

The president of the confederation of Moroccan pharmacists’ unions, Mohamed Lahbabi, points out a different origin: the possible administration of chemicals to animals, in order to make them grow faster. In particular, the official cited the name of a dietary supplement used for bodybuilders, a “concentrate of proteins, whey and milk proteins”. This product, coupled with hormones, would swell the cattle, but with a size disadvantage, it would give the meat its unusual coloring as soon as the animals are slaughtered.

For its part, ONSSA considers that “the greenish color of the carcass or its putrefaction results from the failure to observe the hygiene rules related to the slaughter and skinning of sheep and the carcass”. 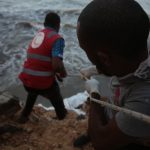