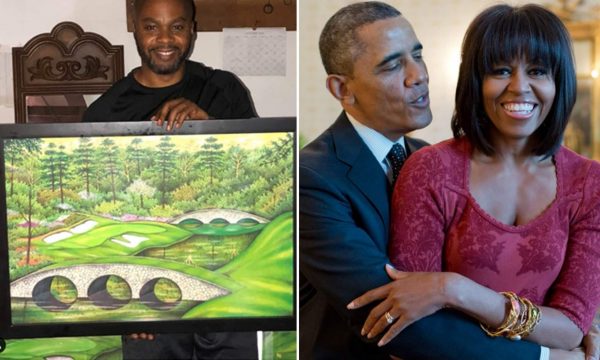 Michelle Obama bought a drawing of the 12th hole of Augusta National Golf Club as a Christmas present for her husband, Barack. The special golf gift is the work of artist Valentino Dixon, who was exonerated in 2018 after spending 27 years behind bars for a crime he did not commit.

Michelle, moved by Dixon’s story after seeing it air on HBO’s “Real Sports”, reached out to buy a golf-themed drawing for her golf-loving husband for Christmas. Dixon shared the news on Instagram on Christmas Day: “Happy Holidays everyone, Michelle Obama purchased this Augusta National 12th hole 20×30 drawing for Barack as a Christmas gift.” He continued: “It was an honor and a privilege, God is good.”

The golf course drawing that was sold to Michelle was the first painting that Dixon completed as a free man. Dixon, who grew up in Buffalo, had been arrested in 1991 after a fight in front of a restaurant left one man dead. After an anonymous tip was given, Dixon, then the father of a six-month-old baby girl, was arrested.

Though another man later told reporters that he actually pulled the trigger that night, authorities did not speak to him. “Eight witnesses cleared me of the crime. When I went to trial, my lawyer did not call any of those witnesses. So, I was convicted and given a 39-year sentence,” Dixon explained recently.

Dixon was sentenced in 1991 and served his time at Attica Correctional Facility in upstate New York. While in prison, he turned to art as an escape, “drawing nonstop, 10 hours a day, never taking a day off,” he told Golf Digest. A prison guard later asked him to draw a picture of the 12th hole of the famous Augusta golf course in Georgia as a favor.

Eventually, Dixon started drawing other clubs before reaching out to a journalist behind a column called Golf Saved Me in the magazine Golf Digest. Subsequent media attention from the magazine and a documentary made by Georgetown University students about his ordeal got him pro bono lawyers who started working to get him freed.

In 2018, another man, Lamar Scott, pleaded guilty to the crime, and Dixon was freed. Since then, he has gone on to become a well-known artist, a public speaker and a criminal justice reform advocate. As an artist, he has exhibited his work in art galleries in Buffalo and New York City. Recently, he launched his own YouTube series and his memoir is set to be released.

Earning fame with his golf course illustrations, Dixon also speaks at golf clubs about prison reform. “…These are not issues that they would normally either know about or come into contact with. So I am the link between the inner city and the golf course,” said 50-year-old Dixon, who has met golf champions like Tiger Woods and Jack Nicklaus.

The Buffalo-based artist will now add a drawing for the former president to his many accomplishments. “We have received several inquiries since the sale was reported. Because Valentino’s story is so incredible, his media attention does tend to generate activity over and above the gallery’s day-to-day promotion of his work,” said art dealer Andrew Edlin whose New York gallery carries Dixon’s work.

Dixon is now hopeful that his story will inspire others going through difficult moments. “It’s not how you start, it’s how you finish. My story is one of faith and redemption,” he said. 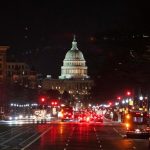 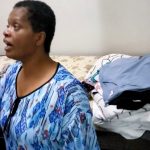