Kelvin Okafor has had a formidable encounter with success as his life-like lead-pencil and charcoal drawings of famous people take the art world by storm. Kelvin describes himself as a “passionate penciled artist… highly interested in detail and precision” and, judging by the work he does with a pencil, we’d have to say his description is, well, precise.

He draws very lifelike portraits of ordinary people and celebrities using pencil and charcoal. Early pieces included portraits of Amy Whinwhoue,Mother Teresa,Lauren Hill,Jamal,Nelson Mandela,Beyonce,Daniel Craig,Corine Bailey Rae,Rihanna and Tinie Tempah.  Kelvin was Raised in Tottenham, London by his Nigerian parents, who according to him are his number one fans, Okafor says he fell in love with photo realism at a very young age. ‘I work between 90-120 hours on average on each piece,’ he explains. he starts ‘shaping the whole face from the eyes’ ‘I chose to work with celebrities originally because the audience can relate to them and would be able to see how accurately and precisely I was able to draw.
The highly skilled 27-year old has already had more than 50 commissions and is generating a buzz at galleries he exhibits at and online. One of his recent accolades, The Catherine Petitgas Visitors’ Choice Prize part of the National Open Art Competition, was awarded to Kelvin after he received the most votes from the public.  Kelvin has also recently been selected as one of the top two pieces of work in Cork Street Gallery Open Exhibition Winter Show. Okafor also attended St Ignatius College, a prestigious Jesuit school in Enfield
Loading... 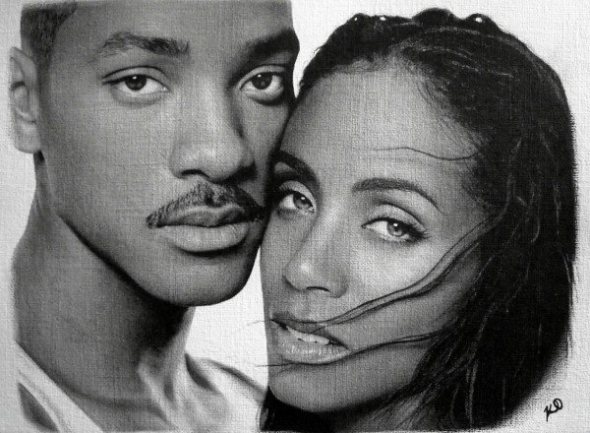 His form of art is called photo-realism and he charges from as much as N320,000 for a drawing.