Germany’s government is in several sit-ins with the Namibian government to settle the knotty underground notion around the practically disregarded mass slaughtering.

The genocide is generally seen as the first of the twentieth century, executed from 1904 to 1907. Students of history trust that the abominations executed by the German troops became a precursor for those executed during the Holocaust.

Within three years, German troops oversaw the extermination of 85% of the Herero population, expropriated their land and seized their source of wealth, their cattle. Today, the once powerful Herero make up about 10% of Namibia’s population and live in some of the country’s most underdeveloped regions, struggling with high youth unemployment.

A century before, another German official was sent to Africa to suppress local revolt against German colonialism. General Lothar von Trotha arrived in what was then South-West Africa to quell a rebellion by the Herero and Nama ethnic groups. The Herero were until then one of the region’s wealthiest tribes, their cattle roaming over a third of Namibia’s vast countryside. Until van Trotha’s arrival, they had managed to keep German colonial expansion at bay.

The Herero faced the German onslaught with little more than spears, bows and a few rifles. Those who weren’t killed were driven into the desert. There, German troops sealed off the perimeter, poisoned their wells and bayoneted anyone who tried to escape dehydration, known as “march into death” for the Herero.

Those who survived the desert were herded into concentration camps and were forced to dig up Herero graves to retrieve the skulls of their dead relatives. Women were forced to skin and boil the skulls, which were used in German experiments to prove Aryan superiority and African inferiority. Of the more than 80,000 Herero population, only 15,000 survived.

The survivors today dress like colonists to relate with the mass killings their predecessors went through. 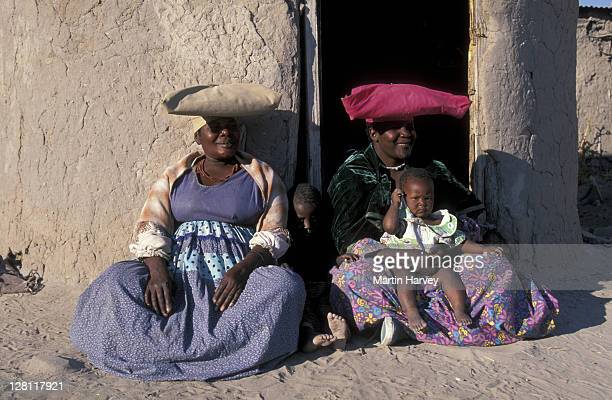 Those skulls were returned in 2004, according to a report then by the Associated Press. The pain of an unacknowledged atrocity was still fresh, with tears and anger as the remains of their ancestors were brought home. Today, Namibia is a fast developing country, with a sound economic policy diversifying from diamonds and other commodities to renewable energy and tourism. Still, many of the country’s historical pains must still be dealt with