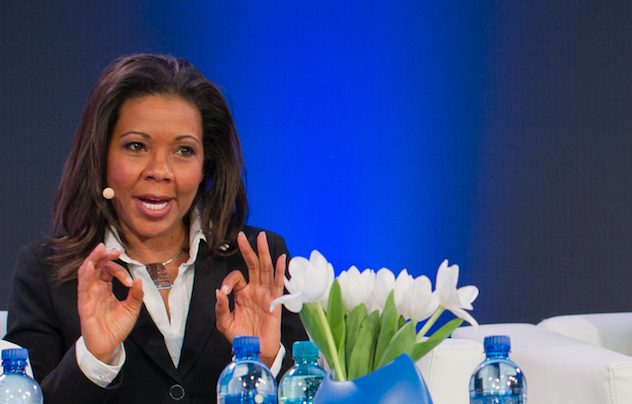 AfriLabs, a network of organisations supporting African hubs has appointed Rebecca Enonchong, founder and CEO of AppsTech, as its new board chair.

The appointment was announced during the 4th edition of the AfriLabs Annual Gathering held from October 28 – 30, 2019 at the African Union Headquarters.

Still on the #AfriLabsAG19, we had the pleasure to have the welcoming speach given by the amazing Rebeccca Enonchong, who reminded us so beautifully that we were the african union and that we need to build this continent together. pic.twitter.com/oOgzVgQMKh

Rebecca is a Cameroonian born technology entrepreneur, who has both Bachelor and Master of Science degrees in Economics from the Catholic University of America. She is a member of the UK Department for International Development’s Digital Advisory Panel.

After graduation, Rebecca worked for Inter-American Development Bank (IaDB) and Oracle Corporation. In 1999, she founded AppsTech, a global provider of enterprise application solutions and incubator for the African diaspora in the U.S.

Presently, Enonchong is also the Chair of ActivSpaces (African Center for Technology Innovation and Ventures) in Cameroon, founder and Chairperson of the Africa Technology Forum, a non-profit dedicated to helping technology startups in Africa and a founding member of the African Business Angel Network (ABAN).

Enonchong’s accomplishments in the African tech space have been widely recognised. In 2002, she was honoured with a Global Leader for Tomorrow award by the World Economic Forum and named among the top 10 Female Tech Founders to Watch in Africa by Forbes in 2014.

Best known for her work promoting technology in Africa, Enonchong was unopposed and re-elected as the Board Chair of AfriLabs. With over 15 years experience in the African tech scene, Enonchong is equipped to continue AfriLabs’ goal of supporting hubs as they raise successful entrepreneurs.

The other new board member announced alongside Enonchong include Moataz Helmy from District Spaces in Egypt as Secretary and Kudzai M. Mubaiwa from iZone Hub in Zimbabwe.

Daniel Chinagozi of Innovation Growth Hub in Nigeria was named Treasurer. Nekesa Were from iHub and Linda Kwamboka of iBiz Africa at Strathmore University, both in Kenya, were also appointed to the board.