Mauritius, officially the Republic of Mauritius is an island nation in the Indian Ocean about 2,000 kilometres (1,200 mi) off the southeast coast of the African continent. The country includes the island of Mauritius, Rodrigues and the outer islands. The islands of Mauritius and Rodrigues form part of the Mascarene Islands, along with nearby Reunion, a French overseas department. The area of the country is 2,040 km2. The capital and largest city is Port Louis. Mauritius was a British colonial possession from 1810 to 1968, the year of its independence..

The people of Mauritius are multiethnic, multi-religious, multicultural and multilingual. The island’s government is closely modelled on the Westminster parliamentary system, and Mauritius is highly ranked for democracy and foreconomic and political freedom. Along with the other Mascarene Islands, Mauritius is known for its varied flora and fauna, with many species endemic to the island. The island is widely known as the only known home of the dodo, which, along with several other avian species, was made extinct by human activities relatively shortly after the island’s settlement. Mauritius is the only country in Africa where Hinduism is the largest religion.

Mauritius is a major tourist destination, ranking 3rd in the region and 56th globally. It enjoys a tropical climate with clear warm sea waters, attractive beaches, tropical fauna and flora complemented by a multi-ethnic and cultural population. These tourism assets are its main strength, especially since they are backed up by well-designed and run hotels, and reliable and operational services and infrastructures

Mauritius is now the sub Saharan Africa’s most competitive economy according to the latest ranking of ‘The Global Competitiveness Index,’ by the World Economic Forum (WEF).

The country however ranks at number 45 on the global ladder of 138 countries with a score of 4.49, a step from their ranking last year. Mauritius is sandwiched by Italy and Portugal.

South Africa, Rwanda, Botswana and Namibia completed the top 5 places for sub Saharan Africa. The WEF has been measuring economic competitiveness among countries since 1979. 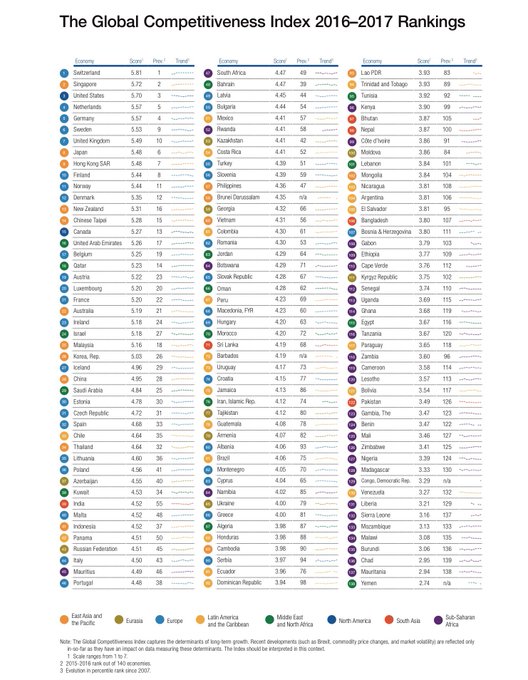 The WEF defines it as “the set of institutions, policies and factors that determine the level of productivity of a country”. Others are subtly different but all generally use the word “productivity”.

Below is the top 10 of sub Saharan Africa’s competitive economies.