Manny Pacquiao has signed a contract with Rizin just months after mercilessly mocking Floyd Mayweather for fighting in the organization. 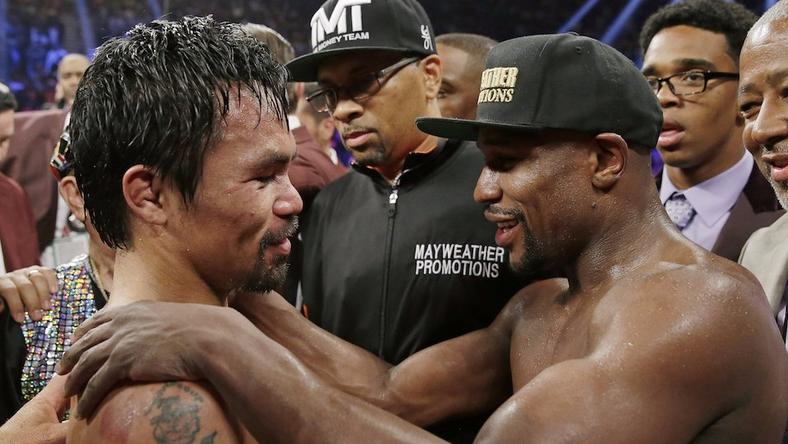 Founded in 2015, Rizin is the Japanese mixed martial arts organization that became world famous when it staged an exhibition bout between its young kickboxing talent Tenshin Nasukawa and the retired boxer Mayweather.

The American needed only one round to knock Nasukawa down three times, dominating the smaller fighter so easily that Nasukawa burst into tears when Mayweather had his arm raised as the winner.

The bout was called “fake” by the former UFC heavyweight Brandan Schaub and ridiculed by Pacquiao because of the height and weight differential.

After watching Mayweather annihilate Nasukawa, a fighter 4.6 kilograms lighter, Pacquiao repotedly said : “Here is an early New Year’s resolution. To continue to only fight experienced opponents who are my size or bigger.”

Now, Pacquiao himself will be involved in an upcoming Rizin event.

Rizin CEO Nobuyuki Sakakibara confirmed the news on Sunday when he tweeted that Pacquiao is following Mayweather into the company.

“Following Mayweather, Rizin 15 will make a new gimmick with this guy,” he said, in a tweet supported by two photographs which appear to show Pacquiao signing a contract.

“I will announce it as soon as I return home so please look forward to it.”

It is unclear how involved Pacquiao will be at the Rizin 15 show at the Yokohama Arena in Yokohama, Japan, especially as it is perhaps telling that Sakakibara’s announcement did not include the word “fight.”

The show will be held on April 21, less than two weeks away, which also leaves Pacquiao little time to prepare for an, as yet undetermined, opponent.

Mayweather made $9 million for his Rizin cameo on December 31, 2018, so Pacquiao may stand to make a similar amount should he compete in Yokohama this month.