It’s an uncontrollable crowd throwing songs and sketching dance steps that has welcomed the hero to his homeland. Mamadou Gassama arrived in Mali on Saturday, June 16th. Parents, friends and ex-Malian compatriots have all come to greet the one who is considered a hero everywhere in the world.

In 2013 Mamdou Gassama decided to leave his native country for adventure in Europe. An adventure so dangerous that some leave it there. After a perilous trip to Libya, and then crossing the Mediterranean, Gassama lived the galley in the migrant camps in Italy before arriving in France in September 2017.

But recently, the life of this young Malian has tipped when he climbed 4 floors to save a 4-year-old hanging on the balcony of his house. The video of this heroic gesture made all the social networks before this savior is received by French President Emmanuel Macron at the Elysee Palace. 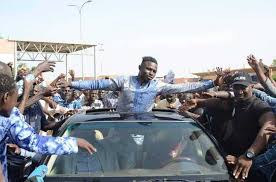 After this visit to the Elysée, Gassama, the young man obtained the status of legal immigration and joined the French firefighters.

This triumphant return to Mali does not excite everyone. Indeed, the political refugee status granted to Gassama provokes reactions. Why such a status if the latter runs no danger in his country.